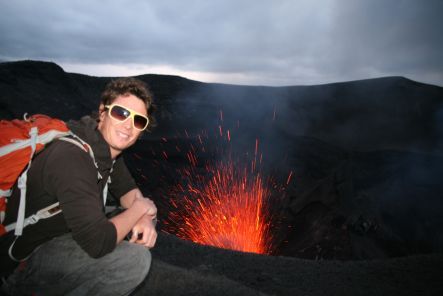 A volcanologist's dream: Ben Kennedy watches volcanic activity from the crater of  Mount Yasur on Tanna Island in Vanuatu.

Volcanic eruptions remain unpredictable, but a team of volcanologists at the University of Canterbury is recreating the processes that happen inside a volcano as it is about to explode. Ben Kennedy and PhD students Paul Ashwell and Felix von Aulock use chunks of cooled magma, or volcanic glass, collected from the debris of past volcanic eruptions to simulate and study the conditions inside an active volcano. With the help of furnaces and high-tech pressure cookers, they re-heat the magma under pressure and monitor as gas bubbles expand and change shape. The team also studies the remnants of past volcanic eruptions such as the devastating Mt Tarawera event in 1886 to work out which conditions lead to it. 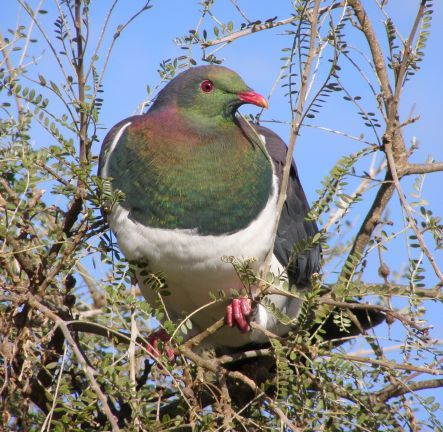 And a kereru in a kowhai tree ... (image: Rosalynn Anderson-Lederer)

There’s been a resurgence in native bird numbers in towns and cities around New Zealand in recent years. In Wellington, some of that has been attributed to the halo effect of the Zealandia sanctuary, while possum trapping, maturing gardens and regenerating bush also play an important role.

One species that is doing very well in Wellington is kereru, our large native pigeon. Monica Awasthy did her PhD at Victoria University looking at how kereru use gardens and bush reserves, and she’s been involved in the Kereru Discovery Project. She offered to take Alison Ballance to a well-known kereru hot spot at Otari-Wilton’s bush, but on a wet day there was more talk about kereru than sightings of actual kereru!

For information on kereru-friendly garden plantings, advice on what to do with injured birds and other kereru-related information check out the WWF-Wellington City Council-sponsored Kereru Discovery Project website.

From left to right: the testing rig with the hydraulic arm raised, Mark Battley in front of the water tank, a slam-test in action

At IRL in Parnell, Mark Battley and Tom Allen from the University of Auckland are using a machine with an hydraulic ram in a water tank to slam test parts of boat hulls made out of new composite materials. The materials are made in the lab and are often sandwich composites, which are tested at various heights and covered with pressure transducers and strain gauges to measure how far the material stretches. The materials are also tested while still in the rig, to see how much they bend. Acceleration and displacement of the rig are measured as well, to determine force and the speed the composite material is travelling at. The results feedback into creating better materials for boats, as well as any other object that can hit the water, such as helicopters. To see a composite being slam tested, watch the video below.

Dennis Gordon, left, has edited all three volumes of the New Zealand Inventory of Biodiversity, and botanists Patrick Brownsey and Phil Garnick-Jones were authors of the land plants chapter (image: A. Ballance)

With the publication of volume three of the New Zealand Inventory of Biodiversity, New Zealand has become the first country in the world to catalogue its living and fossil biodiversity (not including, of course, the microbes – who knows how many volumes would be needed for that exercise!)

Alison Ballance heads to the herbarium at Te Papa to meet series editor Dennis Gordon from NIWA and hear about the 12-year, 3-volume, 6.7 kilogram undertaking. She also talks with two of the authors of the land plants chapter - Pat Brownsey from Te Papa Tongarewa, and Phil Garnock-Jones from Victoria University – and Pat shows her some of the first plant specimens collected in New Zealand, from Joseph Banks and Daniel Solander, naturalists who accompanied Captain James Cook aboard HMS Endeavour in its explorations of the South Pacific in 1769-70.

There are earlier Our Changing World interviews that also cover the Inventory project: when volume one came out in August 2009 Alison Ballance visited Andrew Stewart in the fish collection at Te Papa and caught up with book editor Dennis Gordon. In early 2011 Alison Ballance joined a search for cumaceans, or comma shrimps, which appeared in the just-published volume two. Veronika Meduna spoke with Dennis Gordon about his favourite group of creatures - bryozoa - and the process of creating the Inventory of New Zealand life, in February 2009, and in 2007 Dacia Herbulock spoke with Dennis Gordon about the Catalogue of Life project.