Back home in the United States, Tom McFadden is a biology teacher. Over here, he’s known as a Fulbright scholar, a Science Communication student at the University of Otago – and a science rapper. His rapster name is the Rhymbosome (a play on the protein catalyst ‘ribosome’), and he’s combining his dual loves of music and science to inspire school students.

Alison Ballance joined him at Cardinal McKeefry Primary School in Wellington during a visit as part of the US Embassy-sponsored Science Idol 2012 tour, and the result is a mash-up of an interview, Tom’s hip-hop music, and his presentation to a hall full of enthusiastic kids.

Science Idol 2012 is part of the New Zealand International Science Festival being held in Dunedin from 30 June – 8 July. Science Idol is looking for the best science rapper from around the country, and the prize includes a trip to Dunedin and a chance to professionally record the winning song. There are 3 age categories, including adults, and you can find more information here. 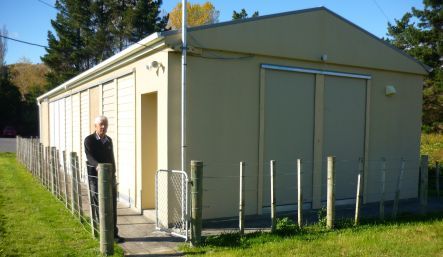 BRANZ’s Mark Bassett is studying the physics of how heat, air and moisture move around walls, to learn how to improve the water management capacity of buildings and hopefully prevent another leaky building problem in the future. This involves work in an experimental building which has various panels of different building materials on the walls. Water and test gas is then pumped in and studied, with the experimental data feeding into models. Watch a video of some of the research being conducted by Mark Bassett here.

Next week is our last chance to see a Transit of Venus when the planet performs a mini-eclipse as it passes between Earth and the sun. In past centuries, astronomers and explorers – including Captain James Cook – observed this rare but predicatble celestial phenomenon to measure the scale of the solar system. Cook’s voyages are of course inextricably linked with New Zealand’s history and, as science historian and astronomer William Tobin explains in this interview, the upcoming transit will be a re-run of what Cook saw in 1769.

Tobin also discusses the strange pattern of Venusian transits and their historic and ongoing significance for astronomy. The current interest is fuelled by the search for extra-solar planets, ie planets that orbit around other stars outside our own solar system. At the time of Venus' last passage across the sun in 2004 (which was not visible from New Zealand) astronomers had detected only two such planets. Both were the size of Jupiter and they were discovered by measuring the tiny reduction in radiation from their parent star as they passed in front of it. Now, eight years later, more than 1000 such exo-planets have been spotted, mostly thanks to NASA's Kepler spacecraft, but it remains difficult to tell a potentially Earth-like planet from one that is more similar to hot and hostile Venus. Next week's transit  will help astronomers in their quest.

Next week's Transit of Venus will be visible in New Zealand from 10.15am to 4.43pm on Wednesday, June 6. However, Venus is very small compared to the disc of the sun. It will be visible as small black spot, not much larger than a sun spot or a "beauty spot on the face of the sun". Therefore, it’s important not to look directly at the sun with the naked eye, binoculars or through a telescope to avoid damage to the retina. Normal sunglasses aren’t safe either!

The safest way to observe the transit is at an observatory through a safe solar telescope. Auckland's Stardome Observatory will be open from 10am to 5pm with free viewing through their courtyard telescopes, which have all been fitted with new solar filters. Wellington's Carter Observatory also has several telescopes with solar filters available for viewing the transit throughout the day. The next Transit of Venus will happen in 2117.

For a list of events throughout New Zealand, have a look at the Science Media Centre's resource page.

Ulva Island, Rats and a Vision of Paradise

Since Norway rats were eradicated in 1997 Stewart Island’s Ulva Island has become a wee slice of bird paradise. But Christmas 2010 brought the Department of Conservation’s Brent Beaven an unwelcome present - news that rats had re-established on the forest-covered island.

Following a second rat eradication in late winter last year, Alison Ballance heads to Ulva Island with Brent to see how the rats and the poison bait drop affected the native birds, how bird numbers have bounced back again after the rats were removed, and they run into Matt Jones from the Ulva Island Charitable Trust. The long-term robin and saddleback population monitoring and genetics projects on Ulva Island have been led by Ian Jamieson from the University of Otago, and you can listen to an earlier interview about that here.

Brent also talks about his Tindall Foundation-sponsored Stewart Island/Rakiura Community and Envrionment Trust project to scope and cost getting rid of pests from all of Stewart Island, which he found would be feasible and would cost $35-55 million.

Unfortunately, earlier this week a rat was found in a trap on a little islet next to Ulva Island, so it’s not yet officially rat-free. Brent Beaven hopes that genetic testing will show the rat’s a new arrival, rather than one that survived the bait drop, but the results are several weeks away yet.

Brent Beaven (left) on Ulva Island which boasts a regenrating bush understory, including many lancewoods, and dry gravel paths (images; A. Ballance)