Our Changing World for Thursday 20 October 2011 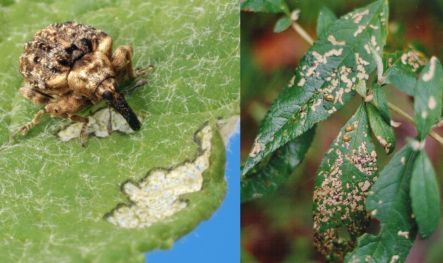 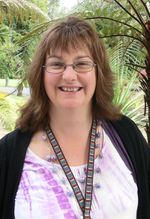 There are more than 500 species of problem weeds in New Zealand, and as well as the familiar gorse and old mans’ beard there are some little known but ubiquitous weeds such as buddleia (Buddleja davidii). Better known to gardeners as the butterfly bush, as its striking purple racemes of flowers are a magnet for butterflies, its sale is now banned from nurseries. Nonetheless, this fast-growing, hardy woody shrub is a pest in young pine plantations and on river beds following floods (and it frequently grows out of inner city walls and pavements).

Scion entomologist Toni Withers (left; photo by Scion) shows Alison Ballance a buddleia bush that is bearing the marks of the buddleia leaf weevil, introduced from China as a biocontrol agent and recently released by regional councils and forestry companies throughout New Zealand. Scion reports that ‘the weevils are achieving similar damage to herbicides in late summer to autumn, but without the need to spray’. 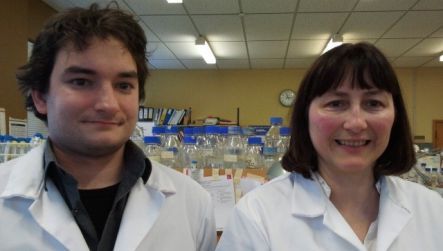 Massey University’s Jasna Rakonjac (above right) and Julian Spagnuolo (above left) are trying to exploit the “Achilles’ heel” of Gram-negative bacteria, namely the giant channels, or secretins, found in their outer membrane. These channels have a tightly latched valve or gate, which allow toxins out, but stop anything else getting back in. Marjorie Russel from the Rockefeller University, New York, NY, USA and her colleagues, were the first to characterise these giant channels in bacteria.

Jasna Rakonjac and Julian Spagnuolo have obtained mutants of Escherichia coli which have “leaky channels”. The changes to the bacteria’s secretins make them susceptible to two different antibiotics (Vancomycin and Bacitracin) and a detergent (sodium deoxycholate), agents which have no effect on control populations. This suggests that if small molecules can be found which “open” the secretin gate, then combined with antibiotics, they could be an effective treatment against Gram-negative bacteria. 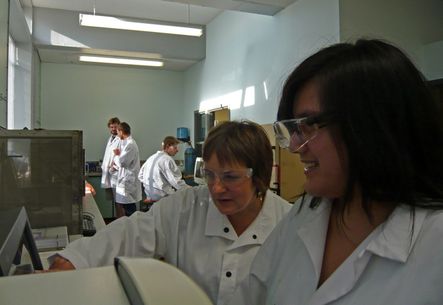 University of Canterbury chemist Alison Downard (centre) and her team, Lita Lee (right) and at the back, from left to right, Paul Robertson, Andrew Gross and Brad Simons (image: V Meduna)

In electrochemistry, electrical energy is used to force oxidation and reduction (redox) reactions to occur at electrodes. University of Canterbury chemist Alison Downard is particularly interested in the materials and surfaces of electrodes as they are the starting point for any chemical reactions. As a Principal Investigator at the MacDiarmid Institute, she combines her research in surface chemistry with nanotechnology and explores how extremely thin surface coatings can influence the properties of the electrode material. She hopes that better understanding of the chemical processes at the surface will make it possible to control the reactions. Although her own work is focused on fundamental questions, she can foresee several applications, including single-molecule sensors and nano-sized coatings that can cover irregular surfaces. One of her projects investigates how electrodes coated with carbon nanotubes could be used to persuade microbes to discharge excess electrons and thus produce microscopic power plants.

On Wednesday, October 26, Alison Downard will give a presentation about electrochemistry in Napier, as part of the Marie Curie lecture series, a year-long national tour of talks by female New Zealand chemists in honour of Curie’s Nobel Prize in Chemistry in 1911.

Wildlife photographer Rod Morris recalls how a visit to New Zealand’s largest open-cast mine on the Stockton Plateau prompted him to join calls for the protection of the nearby Denniston Plateau, which has been earmarked as a site for a 140-hectare coal mine. In August this year, Australian mining company Bathurst Resources Ltd was granted resource consent for an open-cast mine. However, three groups, including Forest and Bird, lodged an appeal against the decision and the matter is currently before the courts. Meanwhile, Rod Morris has embarked on a personal mission to survey the biological diversity of the area. He discusses his observations of several unique species of earthworm, the giant land snail Powelliphanta patrickensis, giant flat worms and ground weta. He argues that the plateau almost acts as a natural mainland island because of the interplay of the area’s harsh climate and geology, with the result that the numbers of introduced predators remain low and native invertebrates thrive, in turn supporting carnivorous land snails and native bird fauna.