Our Changing World for Thursday 22 September 2011

Even though they’re still a rare sight on the roofs of domestic homes, we’re becoming increasingly familiar with the concept of photovoltaic cells which generate electricity, or solar panels that thermally heat water.

But Waikato University engineer Mike Duke wants to take the concept one step further – and create a roof that has both those functions integrated into it. He is convinced that solar energy will become increasingly important, especially in a country such as New Zealand which is blessed with lots of sunshine and has a solar energy resource of about 4 kWh/ m2 per day. Mike takes Alison Ballance to see a working prototype of a thermal roof which currently heats water for Waikato University’s dive pool. The research has already been commercialised in a spin-off company called Solenza. 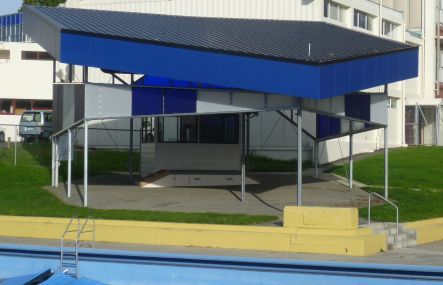 This prototype solar roof currently heats water for Waikato University's dive pool. The next step is to integrate photovoltaic cells into the same roof.

People who can speak more than one language are often deemed to be more sophisticated – even if they can only say a few words.  It turns out to be the same for some birds. Ben Bell and Joseph Azar from the Centre for Biodiversity and Restoration Ecology at Victoria University are studying vocal appropriation, a process in which a bird will copy something from its environment (often another bird’s song ) and incorporate it into its song. Amelia Nurse met up with them at the university to sample some of their recordings. 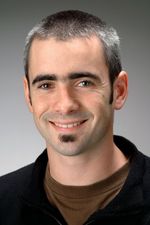 Nuclear magnetic resonance, or NMR, is a research technique that exploits the magnetic properties of certain atomic nuclei to determine physical and chemical properties of matter. It uses large magnets that produce a strong field and probes molecules or larger samples of materials with radio waves. In a medical context, it is used routinely in advanced imaging techniques, such as magnetic resonance imaging, or MRI.

Mark Hunter (pictured on the right), a research fellow at Victoria University, uses the method to determine how fluid flows through complex, porous materials such as wood and rocks. Recently, he became the first doctoral student in the Southern Hemisphere to receive the prestigious international Raymond Andrew Prize for his research on developing techniques to determine the nonlocal dispersion tensor, a key qantity in measuring and predicting the dispersion of liquids. Having finished his PhD, Mark Hunter's focus is now developing hardware to make the NMR technique portable and suitable for magnets with a smaller magnetic field. 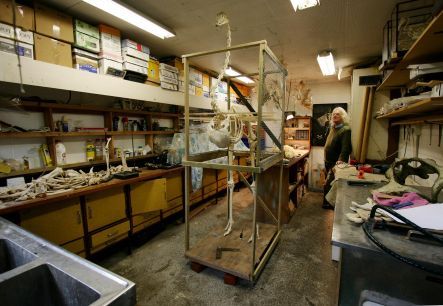 George Holley and the ostrich skeleton in his workshop (image: Fritz Schone)

In the Wellington suburb of Brooklyn, George Holley runs an eclectic business called Skulls Downunder Ltd out of the shed in his backyard. Skeletons, skulls and bone material from fish, birds, and other animals (like possums and hedgehogs) that would otherwise go to waste are collected, and then processed into aesthetically valuable, educational, and collectable material, and then sold all over the world.

Ruth Beran goes to visit George Holley and discovers that he uses scalpels to remove as much meat from the skeletons as he possibly can. The bones are then cleaned by Dermastis beetles, degreased over 24 hours using 1,1,1-Dichloromethane, and bleached with hydrogen peroxide and ammonia, resulting in white degreased, odourless bones. Skeletons are pinned back together and can be displayed in Perspex cases.