Our Changing World for Thursday 15 September 2011 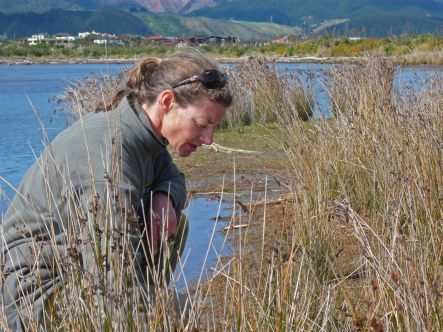 Department of Conservation ranger Lisa Clapcott inspects a patch of remuremu, Selliera radicans, a small plant that can thrive in wetlands and salt marshes, while keeping her eye out for the rare sea sedge, Carex litorosa. (image: V Meduna)

The Waikanae estuary, on the Kapiti coast, is a significant wetland area that attracts more migratory and resident birds than any other part of the coastline north of the capital. Bird species that breed at this river mouth include banded dotterel, variable oystercatcher, pukeko and dabchick. Other avian residents include white-fronted tern, Caspian tern, pied stilt and several species of water fowl. Royal spoonbills have nested on Kapiti Island since the early 1990s, and they regularly visit the estuary to feed in the shallow waters.

The Waikanae Estuary Scientific Reserve, which was established in 1987, connects with the Kapiti Marine Reserve and provides a rare corridor for animals that move between the sea, the river and land habitats. The mosaic of tidal sandflats, sand dunes, salt marshes and small lakes also shelters a number of highly adapted plants, including carpets of remuremu which thrives in the firm mud of the estuary, and two regionally rare carex species.

This estuary is one many places thoughout New Zealand where local residents work hard to restore and maintain a precious ecosystem. As part of Conservation Week, the Waikanae Estuary Care Group is organising a working bee this Saturday, September 17, to plant and clear weeds from the dunes. To find out about activities and events in other parts of New Zealand, have a look here.

Alexei Drummond works in the Computational Evolution Group in the Department of Computer Science at Auckland University, and is a member of the Allan Wilson Centre for Molecular Ecology and Evolution. He won one of the inaugural Rutherford Discovery Fellowships in 2010. He is an evolutionary biologist who relies heavily on computational science to model complex biological processes, and he has developed and commercialised several widely used software packages, BEAST and Geneious.

Alexei talks with Alison Ballance about modelling the rapid rates of evolution of infectious diseases, especially swine flu and HIV, using large genetic datasets to track the spread of the disease in real-time, and as well as working back to identify when and where the disease first evolved. He has been involved in research on the evolution of languages to work out how people spread through the Pacific.

Every year 1.5 million tonnes of organic waste goes to landfill in New Zealand. Government and businesses alike are realising that this trend can’t continue and are increasingly looking at science to turn what in the past was considered waste, into a source of energy.

Spectionz is a New Zealand clean-tech company which is developing technologies to turn waste streams into products of value – like energy. They take any sort of organic waste and convert it into its component parts. In the case of their pilot plant that means taking dried bio-waste and processing it with their prototype microwave pyrolysis machine. Amelia Nurse talks with Mike Henare, one half of the Spectionz team, at their pilot plant located out at the sewage ponds in Paraparaumu.

The equipment, including the hypoxicator, used in the experiments.

A team of Massey University scientists are conducting studies to determine if mild hypoxia could be contributing to poor decision making in aircraft. Hypoxia is a lack of oxygen, usually associated with reduced pressure and increased altitudes. The symptoms of hypoxia are progressive, deceptively insidious, and initially very subtle, and depend on how hypoxic the person is. Hypoxia can cause problems with vision, personality changes, mental confusion, poor decision making, fine tremors, a flapping of the hands and various other symptoms.

Passenger planes have pressurised cabins to keep oxygen at safe and comfortable levels during flight. Aviation regulations require cabin pressurisation (or supplementary oxygen) for all flight above 10,000 feet, but mild hypoxia occurs for passengers and crew in aircraft cabins that are pressurised to an altitude of about 8,000 feet.

Using tasks to test psychomotor abilities, cognition, and risk assessment, the team of scientists, which includes Stephen Legg, Stephen Hill, Aaron Raman, Andrew Gilbey, Toby Mundel and Zac Schlader, have found tentative evidence that mild hypoxia can affect aspects of complex cognitive task performance and risk judgement. They recommend that further studies should be conducted, and Ruth Beran goes to the Human Performance Lab at Massey University in Palmerston North to see how they’ve been conducting their experiments with the use of an hypoxicator.