Our Changing World for Thursday 8 September 2011

Tree weta are a familiar sight in forests around much of New Zealand, and in North Island gardens. But what many people may not realise is that they are also a familiar sound – head into the bush at night, and you can often hear the rasping sound of male weta defending their territories. PhD student Kate Lomas at the University of Auckland is investigating the sounds that weta make, and also their ability to hear sounds. In particular, her research has focused on the anatomy of the weta’s ears, which are found just below the insect’s ‘knees’ on its two front legs. Kate tells Alison Ballance about the intriguing results of her research, and plays her some weta sounds.

The wound-healing device, and Leonardo Negron (front) and Stan Lun (back right) in the lab

Based in Lower Hutt, biotechnology company Mesynthes is turning sheep fore-stomachs into wound-healing products. The first Endoform product they have created can be used externally on the skin for chronic wounds, like venous ulcers or diabetic wounds, while the second product they are developing is for internal applications, for example, after a hernia operation. Another product in the pipeline aims to add an anti-microbial agent to prevent infection.

With their sights firmly set on the United States market, Mesynthes is confident that their technology is competitive, and scientific director Barnaby May takes Ruth Beran through the lab to meet Astrid Authier, Leonardo Negron and Stan Lun, and also explains how the biomaterial works as a scaffold for tissue regeneration. 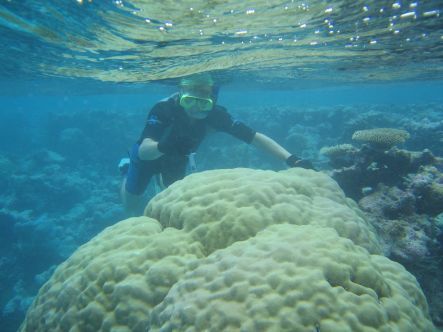 Coral reefs are in serious decline and expected to vanish within a century. The most widely recognised threat to coral reefs is the warming of the world's oceans, which causes oxidative stress in corals and the loss of symbiotic algae that are essential for their survival - a process known as coral bleaching. However, some corals bleach more readily than others, and Victoria University coral biologist Simon Davy is investigating this difference in thermal tolerance and whether it is linked to the type of symbiotic algae living within the coral. He uses sea anemones, which form similar symbiotic realtionships with algea, as model systems to study bleaching in the laboratory and to assess the impact of ocean acidification.

Davy's team also studies living reefs throughout the world, including the southern-most coral reefs around the subtropical Lord Howe Island and one of the most pristine coral ecosystems at Palmyra Atoll, where the group works as the only non-US member of the Palmyra Atoll Research Consortium, to explain the various thermal limits of reef corals, their current biogeographic distributions and their likely fate as the oceans continue to warm. 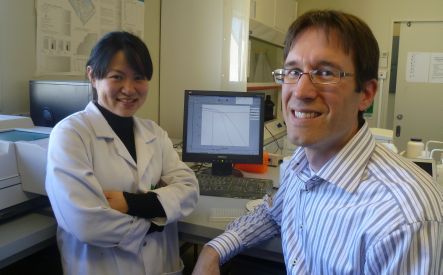 Wayne Patrick, pictured here with PhD student Valerie Soo (left), was one of ten Rutherford Discovery Fellows announced today, and in 2010 he was named New Zealand’s Young Biotechnologist of the Year.

We hear a lot in the news about antibiotic resistance, and the increasing problems that hospitals face with superbugs such as MRSA, which are resistant to multiple antibiotics. And the problems are set to get worse, as major drug companies are no longer developing new kinds of antibiotics.

How bacteria evolve resistance is something that interests biochemist Wayne Patrick from Massey University. His work focuses on the role that proteins play in adapting bacteria to new environments, and Wayne takes Alison down to his lab to meet PhD student Valerie Soo, who is working with him on promiscuous proteins. The results of some of their work, which used modern high-throughput genomic techniques to expose E. coli bacteria to 237 toxin-containing environments, was published recently in the Proceedings of the National Academy of Sciences.