Our Changing World for Thursday 18 August 2011

We catch up with the findings of the first joint Australian – New Zealand Antarctic whale research expedition, which we featured on the show in March last year, just before it headed south.

The expedition was the first mounted by the Southern Ocean Research Partnership, which was established early in 2009 to ‘enhance cetacean conservation using non-lethal research methods’, and the findings were presented to the International Whaling Commission when it met recently. The trip took place on the NIWA research boat Tangaroa, and was jointly led by Nick Gales from Australian Antarctic Division and Rochelle Constantine from the University of Auckland.

Alison Ballance talks with Rochelle Constantine about their trip, methods and results, and what that tells us about where the humpback whales seen migrating past New Zealand come from.

Raoul Island is the most well-known and most frequently visited island in the Kermadec group, and we have featured the botany and insects of the island during this radio series. Opportunities to get ashore on the smaller, more southern islands in the group are rare, and landings are often difficult if not impossible. During the Kermadec Biodiscovery expedition, however, the ‘extra terrestrials’, as the two terrestrial biologists were dubbed, managed to get ashore on every island and just about every islet, with the exception of Curtis Island. Alison Ballance caught up with Department of Conservation entomologist Warren Chinn and botanist Peter de Lange on their return to the Braveheart after visits on Macauley and Cheeseman islands (pictured above) and L'Esperance Rock (pictured below) to hear their impressions of these remote and rugged islands. 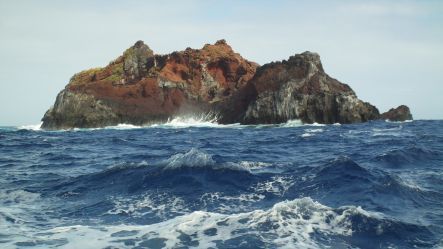 Mandy Reid and Stephen Keable are marine invertebrate specialists with the Australian Museum. As many of the creatures they were collecting are very small, they focused their efforts on collecting habitats and substrates such as hard corals, algae, rubble and sediments. However, they also turned up larger invertebrates such as sea hares and octopuses. Alison Ballance caught up with them a few times after dives to find out what collecting techniques they were using and what treasures they were finding. On their return to the museum the samples will be sorted, and any invertebrates sent to the appropriate specialist for identification, so it might be more than a year before they know how many species were collected and whether there are new records and even possibly species new to science discovered at the Kermadecs.

Parry Guilford and his team at the Cancer Genetics Laboratory at the University of Otago, which includes Tanis Godwin, Joanne Guest, and Bryony Telford, are trying to better understand the genetic causes of inherited gastric cancer. They are studying the genetic mutations of E-cadherin gene (which encodes for a cell adhesion protein) and are looking at drugs such as valproate which is used to treat epilepsy, with the hope of finding new treatments for hereditary diffuse gastric cancer.