Our Changing World for Thursday 11 August 2011

Jim Cotter in the lab; and marathon runners at a drink station (right image: Chris Sullivan/Seen in Dunedin)

At the University of Otago’s School of Physical Education, Jim Cotter and Honours student Rachel Kingsford are investigating how dehydration before exercise affects vasopressin (a hormone which causes the kidneys to conserve water) to see if it could lead to improvements in athletic performance.

Research so far suggests that some dehydration may actually benefit those who do cardio exercise regularly, and for the general population, research indicates that rather than drinking eight glasses of water a day, people should be guided by thirst.

Ruth Beran goes to the Environmental-Controlled Lab to watch as Glen Chisholm, an athletic volunteer, is put through some gruelling experiments.

Each year the University of Otago invites a distinguished botanist to deliver the John Smaillie Tennant Lecture. This year’s speaker was pre-eminent botanist and conservationist Professor Peter H. Raven. He is now President Emeritus of the Missouri Botanical Garden, a world-leading botanical research and education institution which he led for four decades. One of Time magazine’s Heroes of the Planet, he has received numerous awards and notable fellowships, belongs to nearly 20 international Academies of Science, was a member of President Bill Clinton’s Committee of Advisors on Science and Technology, and received the United States National Medal of Science in 2001. He spoke in Dunedin on ‘How many species will survive the twenty first century?’

Alison Ballance grabbed the opportunity to talk with Peter Raven the morning after he flew in from the United States and delivered his talk to a full house, and just before he flew out again to Australia to deliver a plenary address at the International Botanical Congress.

Weeds in the ‘pet plant’ line-up near the hostel on Raoul Island (left) include Brazilian buttercup (centre) and black passionfruit (right). (Images: A. Ballance)

Subtropical Raoul Island is highly modified, and although introduced cats, rats and feral goats have been eradicated, it still bears a weedy legacy from many years of farming and horticultural efforts in the late 1800s, mainly by the Bell family. Made famous in the book ‘The Crusoes of Sunday Island’, the Bell family grew fruit –  including Raoul’s well-known oranges – and vegetables to trade with passing whalers. For many years Department of Conservation staff and volunteers have run a weeding programme (PDF) on the island, aiming to rid the island of the most destructive weeds. Alison Ballance joins DoC biodiversity ranger Sian Potier to meet some of the worst weedy offenders, displayed in a ‘pet plant line-up’ near the hostel.

But first Alison heads into the forest where botanists Sue Bennett (above right) and Nicky Atkinson (above centre) are resurveying permanent vegetation plots put in place to monitor how the vegetation changed following the rat eradication in 2002. Their work was proving more challenging than usual due to large amounts of damage caused by Cyclone Bune which passed over the islands at the end of March 2011.

Cyclone Bune knocked out the tops of many nikau palms (centre) and blew over many pohutukawa (right), but native seedlings (left), which are more abundant since rats were eradicated from the island, should be able to take advantage of the extra light caused by gaps in the canopy (images: A. Ballance). 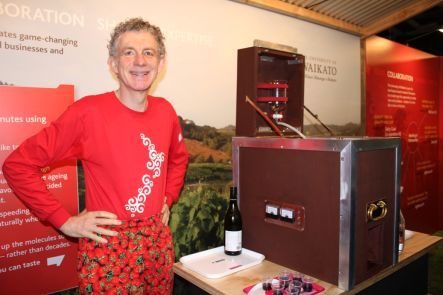 It all began as a summer research project to test the validity of work published by a team of Chinese scientists. Jonathan Scott, at Waikato University's Department of Science and Engineering, was expecting to disprove the group's claims that wine could be matured rapidly using electric fields. He used an astringent-tasting homebrew for the first run through a maturation device, built by summer research scholarship recipient Mark Benseman, and surprised himself when it became noticeably smoother and sweeter after less than three minutes' exposure to a 1000-volt electric field. The team also included Sadhana Talele, who had just finished a doctoral project on electro-poration – the process of using electric fields to make holes in cell walls to allow flavoursome material inside to escape. So far, red wines have responded to the treatment much better than whites, and the team hopes to raise interest from the wine industry to run a larger-scale trial.