Our Changing World for Thursday 21 April 2011

Peter Janssen, left, and Graeme Attwood are investigating several species of methanogens in their research to reduce methane emissions in the rumen. (images: AgResearch)

Among developed countries, New Zealand has an unusual profile of greenhouse gas emissions. Agriculture produces almost half of our total emissions (compared to less than 10% in other developed countries) and methane accounts for a third. In recognition of the problem, several research organisations have formed the NZ Agricultural Greenhouse Gas Research Centre, hosted by AgResearch, in 2009 to investigate ways of mitigating emissions of greenhouse gases other than carbon dioxide.

This feature is part of a series and focuses on methane produced by ruminant animals such as cattle and sheep. The rumen is the first and largest part of the multi-chambered stomach of grass-eating animals. It acts as a fermentation vat where microbes break down the cellulose in the plant material to make it more digestible. One group in the rumen microflora, methanogens, takes up surplus hydrogen and produces methane. Researchers are currently pursuing six strategies to reduce methane production in the rumen: They are investigating the ecology of the system and the genetics of methanogens; they are exploring the natural variation in ruminants and different types of feed to identify animal lines and pasture grasses that produce less methane; and they are developing vaccines and inhibitors that will specifically knock out methanogens but leave the rest of the rumen microbial community intact. In this interview, AgResearch scientists Peter Janssen (pdf) and Graeme Attwood explain how important methanogens are in the rumen and which of the strategies are showing the most promise. 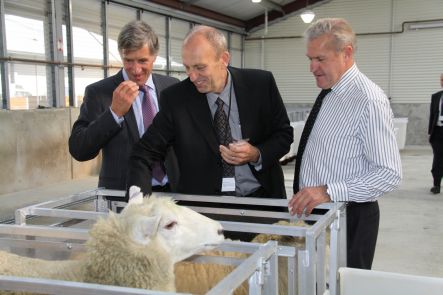 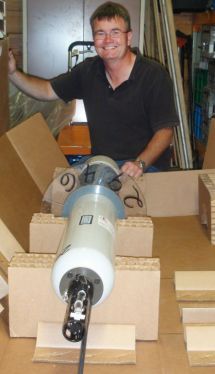 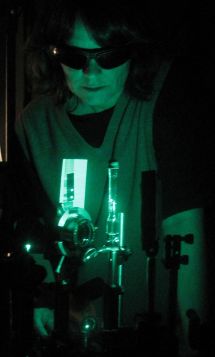 Dragons are dangerous because of the focused heat that comes out of their mouths. And while dragons are the stuff of fantasy, could molecules be tweaked to focus energy too?

Cather Simpson(pictured right using the femtosecond laser for time-resolved Raman spectroscopy. Image: University of Auckland) is trying to create these molecular dragons. She heads the Photon Factory, located in the basement of the Chemistry Building at the University of Auckland. Using various lasers, and techniques such as time-resolved Raman spectroscopy, she's studying how molecular structures can alter with energy inputs, and is also looking at the interactions between electrons and the nuclei of molecules like the iron-carrying haems that exist in haemoglobin in the blood. She explains to Ruth Beran that if molecular dragons are created in the future, then they might be used to target things like cancer, focusing their energy to destroy cancer cells.

The lower Rangiuru Stream is choked with exotic weeds which suck oxygen out of the water at night. The fyke net was left in the stream overnight to sample fish (images: A. Ballance).

For many years floodgates at the mouth of the Rangiuru Stream, where it joins the Otaki River on the coast north of Wellington, have closed on each incoming tide to prevent tidal surges moving up-stream. Whitebait, which are the juvenile stage of native galaxiid fish, swim from the sea into freshwater streams on incoming spring tides, and the floodgates have effectively prevented their passage into the Rangiuru Stream. In an attempt to retain flood protection yet encourage fish passage the Great Wellington regional council have just modified the floodgates with a cantilever that will close them more slowly.

Just before the floodgates were modified Alison Ballance joined Massey University freshwater ecologist Mike Joy on a student field trip to survey the Rangiuru Stream for the presence of native fish. The intention is to survey the stream again at a later date to see if there have been any detectable changes in fish populations. Anna Burrows from Greater Wellington was also there to talk about the Streams Alive project, which is encouraging landowners to plant riparian strips alongside waterways.

You can listen here to an earlier Our Changing World interview with Mike Joy on freshwater fish, water quality in the Manawatu River.

Inanga is one of five whitebait species; floodgates on the Rangiuru Stream close during incoming tides - in the picture at right the floodgates are open during an outgoing tide (images: A. Ballance).