Our Changing World for Thursday 21 October 2010

Optical tweezers allow biologists to use physics to uncover the mechanical properties of microscopic systems, for example, to see what forces are needed to stretch a DNA molecule.

Using tightly-focused laser beams, optical tweezers can pick up tiny objects and move them around. Based on an inverted optical microscope, the objective focuses a laser beam onto a microscope slide where samples sit in solution ready to be trapped. Images from the slide are then displayed on a computer screen using a CCD detector.

To see some optical tweezers (pdf) in action, Ruth Beran meets Bill Williams and Stephen Keen from the Biomaterials Group at Massey University in Palmerston North.

Industrial mathematician Graeme Wake is a professor in the Institute of Information and Mathematical Sciences at Massey University, and Director of the Centre for Mathematics in Industry. He is also a world expert in spontaneous combustion, an area that he describes mathematically as 'gross parametric sensitivity', and which is the second most common cause of unwanted fires, after arson. He talks with Alison Ballance about how he became involved in spontaneous combustion in the early 1960s, working with chemists at DSIR Chemistry to understand a fire in a wool store on the Wellington waterfront in 1948 that damaged much of the surrounding area, with a view to developing safe practise for the storage of items ranging from coal, to milk powder and sugar cane residue.

Graeme Wake also describes a recent long running insurance case he was involved in with his long time collaborator, Sydney chemist Brian Gray, in which a cargo of calcium hypochlorite, a common ingredient in laundry detergents, exploded in the hold of the marine vessel Aconcagua (PDF page 23). The pair proved that the cause of the spontaneous explosion was due to a fault in the manufacturing process.

A 1985 Department of Labour report (PDF) on 'Dust Explosions in Factories' makes interesting reading, while Fire Afloat is an interesting web page detailing examples of early sailing boats in New Zealand that suffered fires caused by spontaneous combustion in their holds of cargo ranging from flax to wool.

A piece of corrugated paperboard, sprinkled with tea dust and placed on a large speaker: shown before testing (left), and after being exposed to vibrations of a particular resonant frequency (right). (Images: A. Ballance)

PhD student Celia Kueh, from the Engineering Department at Waikato University, believes a better understanding of the properties of corrugated paperboard, or cardboard, could improve packaging design. She is looking at the effects of humidity and box design on the failure point of corrugated cardboard boxes, and is developing computer models to predict failure loads. She shows Alison Ballance how she is using resonant frequencies to understand the properties of flat paperboard, and explains how this information will be used to improve her computer models.

Gold as a Catalyst 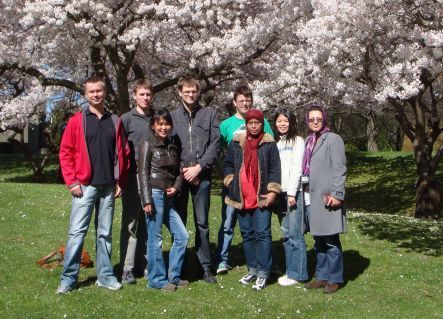 A catalyst is a molecule which facilitates the chemical reaction between other molecules without changing its own shape - and almost everything in chemistry relies on catalysis. Yet, the exact process of how catalysts work, especially on the nano-scale, is still poorly understood. 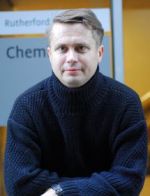 Vladimir Golovko (pictured at left), a chemist at the University of Canterbury and a principal investigator at the MacDiarmid Institute for Advanced Materials and Nanotechnology, has focused his research on improving this understanding. His team is developing methods to produce nano-sized catalysts in a controlled way, from the input of synthetic precursors and components into the system to the detailed structure of the catalyst as it is being fabricated.

The team's ultimate goal is to make catalysis greener by replacing some of the harsh chemicals used in large industrial processes with more benign substances. To this end, Golovko is using gold. The precious metal is usually inert, but if the gold particles are nano-sized, it changes colour and loses its metallic properties. The team has shown that nano-sized gold can act as a catalyst in oxidation reactions, using only oxygen from the air and eliminating the need for less desirable reagents such as peroxides.