Our Changing World for Thursday 14 October 2010 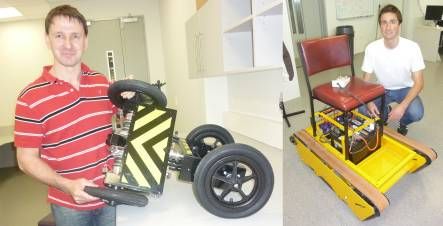 The threat of being buried in rubble in an earthquake is a real and horrifying prospect, and trying to rescue trapped people from collapsed buildings is a dangerous task. To help in such situations, Victoria University engineer, Dale Carnegie, from the Mechatronics Research Group, is developing a hierarchy of small, autonomous 'rubble robots' - he tells Alison Ballance how the 'grandmother' will deploy all-terrain 'mother' robots (in video below), that enter such sites and in their turn deploy expendable mobile phone-sized 'daughter' robots to search for signs of life.

Student Michael Rothbock is working on the currently out-of-commission grandmother robot, nicknamed the 'tank' because of the tank tracks that make her mobile, updating all her sensors and computers. 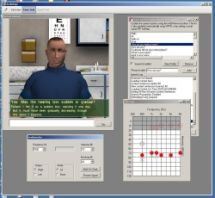 Testing a person's hearing is a lengthy and involved process, and students train using volunteers in audiology booths. But that may be about to change.

At the University of Canterbury, a virtual patient is being developed so that students can learn how to test hearing in a virtual environment.

To see how it's done in real life, Ruth Beran goes to the Department of Communication Disorders, and meets Kathleen Stoop and watches as student Louise Thompson steps Jocelyn Moynehan's through the process.

Catherine Moran and Alex Heitz then demonstrate back at the HIT Lab NZ how the computer-based virtual patient works.

To Believe or not to Believe

Alan Musgrave is a philosopher at the University of Otago. He was educated at the London School of Economics, where his doctorate was supervised by Sir Karl Popper, whom he acknowledges as his inspiration to focus on the philosophy of science. With Imre Lakatos, Alan Musgrave edited Criticism and the Growth of Knowledge, which is seen as one of the most influential collections of essays on 20th-century science philosophy. In his latest book, Secular Sermons, published by University of Otago Press and described as entertaining and provocative, he explores many basic assumptions in science, religion and mathematics. In this interview, he discusses how our beliefs are formed and what role science plays in uncovering reliable truths. Next month, he will explore what it takes to make a discovery.

A year ago Plant and Food Research opened a new pilot processing plant in Nelson to enable the scaling-up of laboratory efforts to find new high-value uses for fish by-products. Alison Ballance catches up with Natural Extracts Team members Susan Marshall and Matt Miller, and PhD student Tim Nalder, to find out about their work, and learns they are particularly interested in proteins, enzymes, and in fatty acids such as Omega 3. She joins the team in the pilot processing plant as they use a large centrifuge to concentrate marine algae which produce Omega 3, and could potentially be used to help produce 'designer' Omega 3 products that target specific parts of the body, such as the brain or heart.