Our Changing World for Thursday 7 October 2010

From left to right: John Munday, a cat with skin cancer on its nose and ear, Nick Cave(images: Massey University, Nick Cave).

The idea that a virus can cause cancer used to be controversial but it is now through that papillomaviruses, for example, cause around 5% of cancers in people, including cervical cancer in women and a proportion of cancers of the mouth. In people, vaccines have recently been introduced to prevent papillomaviral infection and reduce cancer development.

Using diagnostic samples, John Munday is looking at skin cancer in cats and a possible causal link with feline papillomaviruses. He first determines if papillomavirus DNA is present, and then also looks for changes in protein expression, in particular, p16 protein. If a causal link is proven, then a vaccine against papillomavirus could be developed to reduce the development of theses often fatal cancers in cats.

Members of the Ornithological Society of New Zealand have been counting birds around Wellington Harbour, as part of a long-term survey of trends in bird species and numbers that began in the mid 1970s. On the first Sunday of every month, between 1 and 3 pm, 17 observers patrol their patch of the harbour, counting all the birds they see. All coastal species are counted, as are any land birds that venture below the high tide mark. This survey has been running for two years, and the final count will take place in November. This is the fourth time the Wellington Harbour Bird survey has been conducted, and when it is complete the latest survey will be compared against earlier results from the 1970s, 1980s and 1990s. The survey covers 64 kilometres of coastline around the inner harbour, and around the south coast as far as Owhiro Bay.

Alison Ballance caught up with some of the counters during the July survey: Hugh Robertson was at work on the south coast, which has been his patch since the 1980s survey; Ian Armitage, the co-ordinator of the Wellington Harbour Bird Survey, was patrolling the Hutt highway between the ferry terminal and the Ngauranga railway station; Reg Cotter, who helped initiate the survey in the mid 1970s, was on his local beach, Petone Beach; and Sheelagh Leary was in her usual haunt amongst the boats at the Seaview marina.

Science labs, particularly chemistry labs, are just full of glass - beakers, flasks, burettes, the list goes on. But scientific glassblowing itself, is somewhat of a dying art. With only ten or so science glassblowers in New Zealand, mostly attached to universities, there are no new professionals being trained up in the country. If replacements are needed, the search often goes overseas to places like Germany.

Ruth Beran wants to see what a glassblowing facility looks like, and visits Mike Wadsworth and his colleague, Alistair Mead, in the basement of the Chemistry building at the University of Auckland. Mike demonstrates how a small round bottomed flask is made, and also shows her a piece of scientific glassware, a necrodegradometer (left), also known as a liquefaction chamber, which he created for surgical registrar Benjamin Loveday to complete his PhD research looking at how biological samples, in particular necrotic pancreatic tissue, degrade. 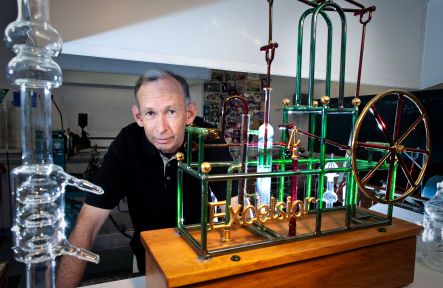