Our Changing World for Thursday 30 September 2010

The research team, from left to right: Matthew McGovern, Mikkel Andersen, Andrew Hilliard, and Tzahi Grunzweig; a picture of a single Rubidium 85 atom, and Mikkel Andersen

Mikkel Andersen was told by his school teacher that seeing a single neutral atom down a microscope was impossible. Yet, this week Nature Physics published an article by a team of four researchers led by Mikkel, showing they could reliably and consistently produce individually trapped Rubidium 85 atoms, and also "see" and photograph this atom.

The whole process takes a matter of seconds, but starts by dramatically slowing down a cloud of about 10,000 atoms in a vacuum chamber. A laser beam is then used to hold about 50 atoms, and then light from another laser at a particular frequency causes the atoms to repel each other, leaving a lone atom.

The research is a major step towards building quantum computers, which need about 20 or 30 separate atoms trapped at the one time, every time. Other groups around the world have seen and photographed neutral atoms before, for example, the Rubidium 87 and the Caesium 133 atom, but until now they haven't done so consistently, with a success rate of 50%. Unlike ions, neutral atoms like the Rubidium 85 atom are notoriously difficult to pin down because they cannot be held by electrical fields.

Ruth Beran goes to the Physics Department at the University of Otago to see a single atom for herself. Morning Report also played a story on this discovery, click here to listen.

Seamounts and the Census of Marine Life

Next week, marine scientists from around the globe are meeting in London to report back on ten years of research in the Census of Marine Life. Fourteen research themes will present their key findings at the Decade of Discovery conference, which kicks off on Monday 4 October. The Census has involved more than 2,700 scientists from over 80 countries, who spent over 9,000 days at sea on more than 540 expeditions, plus countless days in labs and archives. Initial findings of the Census were published in August.

Among them are a team from NIWA, who have been leading the international Censeam project on seamounts, which joined the Census five years ago. Alison Ballance caught up with Malcolm Clark, Mireille Consalvey and Ashley Rowden before they headed to London, to learn more about the seamounts research. The work features in a special edition of the journal Marine Ecology: 'Recent advances in seamount ecology' (September 2010, volume 31 supplement s1). 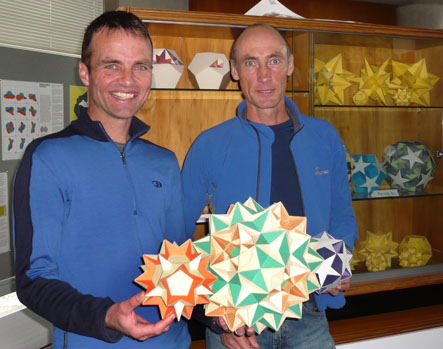 Charles Semple, left, and Mike Steel with some paper models of polyhedra from a collection at the University of Canterbury. Image: Veronika Meduna

Since Darwin's Origin of Species was first published 150 years ago, life's history has most often been represented by a tree, with its root signifying a single common ancestor. But life is not that simple, and the traditional mathematical approaches to reconstructing ancestry are inaccurate in several ways. One example is horizontal gene transfer, where DNA is exchanged between two species. Evolutionary relationships and the flow of genes between species are more accurately described by a web that incorporates several genetic ancestors.

University of Canterbury mathematicians Charles Semple and Mike Steel, who are both also part of the Allan Wilson Centre for Molecular Ecology and Evolution, are developing and applying new mathematical tools and models to help unravel the complexities of the web of life. Their goals are to quantify the extent of horizontal gene transfer in the early evolution of microbes and to determine how far into the past we can reliably reconstruct a detailed human population history.

A year ago, after five dogs mysteriously died on Auckland beaches, the grey side-gilled sea slug (Pleurobranchaea maculata) was found to contain lethal doses of a poison called tetrodotoxin, better known from puffer fish. In an effort to understand this public health risk better, a number of research programmes have received funding in the last couple of weeks, to investigate aspects of the sea slug's ecology, and to find out more about the toxin and its production. Nelson-based Cawthron Institute is collaborating with the Hauraki Maori Trust Board in a quarter million dollar research project funded by Nga Pae o te Maramatanga to see whether tetrodotoxin, also known as TTX, might pose a risk to the collection of kai moana from the Gulf. Paul Rainey at Massey University in Auckland has funding to look at genetic similarities between different sea slug populations. Craig Cary at the University of Waikato has just received a Marsden grant for the project 'Elucidating the origin and ecology of TTX: the phantom marine toxin.'

Alison Ballance headed to the Cawthron Institute, which has carried out much of the work to date, to find out what they've discovered. She talked with toxin chemist Andy Selwood, who helped identify the toxin's presence in the sea slugs, and toxic algae specialist Susie Wood, who is involved in breeding the sea slugs in captivity, and in research to identify whether the toxin is produced by symbiotic algae.