Our Changing World for Thursday 19 August 2010

Left: People in Papua New Guinea tell ancient legends about islands moving away from the mainland. Now, a network of GPS stations keeps track of how quickly and where the land moves. Right: Laura Wallace during fieldwork. (images: Tim Little and Laura Wallace).

Papua New Guinea straddles the same plate boundary as New Zealand but the plates move much faster, creating complex tectonic land deformation patterns. In eastern Papua New Guinea, in the Woodlark Basin, the continental crust is rifting apart at rates of 1-2 cm/yr due to the motion of the tectonic plates there. This rifting is causing a new ocean basin to form to the east of PNG.

The region is also known as a source of rare rocks called eclogites. These coarse-grained and unusually dense rocks form under high pressure in the Earth's mantle and then move to the surface. Victoria University geologist Tim Little says eclogites are found in other areas throughout the world, but have emerged tens of millions of years ago and are no longer easily identified. In Papua New Guinea, this process is ongoing and therefore the rocks are much younger, rising to the surface at rates of two to three centimetres a year. Colleague Laura Wallace, a geophysicist at GNS Science, uses GPS stations to track the horizontal movement of the land and to map out fault lines across the archipelago. Both are part of a larger project at Syracuse University. 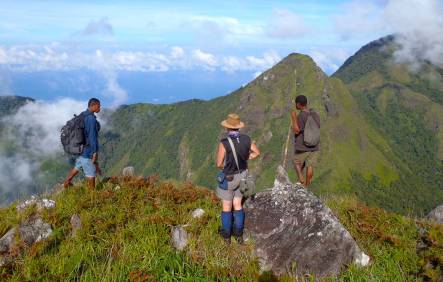 Tim Little and villagers survey the small Goodenough Island in search of high-pressure rocks that have risen from deep within the Earth's mantle.

University of Otago researcher Mary McIntyre works at the intersection of ecology and human health, investigating the biology and distribution of mosquitoes in and around Wellington and the Manawatu. She is particularly interested in their possible roles as vectors for the transmission of emerging diseases such as Ross River virus and dengue fever.

Mosquito-borne human diseases do not yet occur in the wild in New Zealand (although people do catch such diseases overseas and return to New Zealand with them), but climate change in conjunction with changing land use increases the likelihood that this might happen at some point in the future. Despite the recent announcement of a successful eradication campaign for the southern saltmarsh mosquito, New Zealand is still home to three introduced mosquito species, several of which are known vectors for disease in other countries. Alison Ballance tracks down Mary McIntyre in her Ecology and Health Research lab in the University of Otago's Public Health Department, housed in the middle of Wellington Hospital.

Canoe Plants of the Pacific

Hawaii-based botanist and author Art Whistler was in New Zealand recently to deliver the Botanical Society's annual Lucy Cranwell Lecture at the Auckland Museum. He talked about his recent book 'Plants of the Canoe People', which looks at the useful plants that Polynesians moved around the Pacific during their great migrations. The distribution of the plants gives clues as to the order in which the islands were settled, and the origin of the plants gives further insight into the directions of travel. Alison Ballance caught up with the ethnobotanical consultant, who also holds a position at the University of Hawaii, while he was in Wellington to deliver another lecture.

Scientists at the University of Canterbury are working on thin ceramic films which could, for example, allow bones to regrow around metal implants; or enable space craft to resist extremely high temperatures, oxidation, and potentially even self heal, if cracks develop.

Ruth Beran meets Susan Krumdieck who introduces her to Ben Reyngoud, Mark Jermy and Darryl Lee in the lab. They show her the vacuum chambers where these thin films are grown as well as a simulation of gas density inside one of these chambers (see video).