Our Changing World for Thursday 15 July 2010

Epigenomes and the Singing Scientist

Complex science doesn't usually lend itself to music, but AgResearch's Matthew Barnett (below) has written a song about his research into epigenetics, and in particular whether food can turn genes on or off. 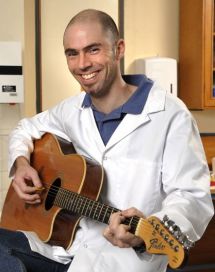 A part-time member of a rock band, he produced The Epigenome Song for last year's MacDiarmid Young Scientists of the Year Awards. While his entry didn't win, the music video he produced has had more than 3,000 hits on YouTube (see video below).

Ultimately, Matthew hopes that his research will lead to the development of foods that can be matched to individual's genotypes, to offer specific health benefits. Another outcome could be personalised diets. His work sits under the umbrella of Nutrigenomics New Zealand, a group which aims to determine how foods and food components affect health at the molecular genetic level. (image: AgResearch)

To discover more about epigenetics, Ruth Beran visits the "Singing Scientist" in his lab at the University of Auckland's Liggins Institute. 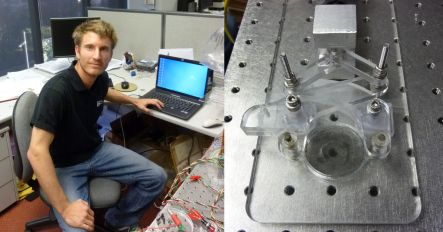 Casey Jowers at his desk at the Auckland Bioengineering Institute and the "cell gym" (images: J. Gregory)

Bioengineering is a fast developing field of research and is quickly becoming big business all around the world. Naturally enough, New Zealand wants its slice of the pie. But at the Auckland Bioengineering Institute at the University of Auckland, the research being done isn't all about the bucks. It's mostly about good health outcomes.

Iain Anderson is principal investigator at the Institute and is part of a group working up innovative engineering solutions to tricky biomedical questions. He talks to Justin Gregory about the goals of bioengineering, the direction of their research, and how the work they're doing could have big implications for the future of health care. Casey Jowers, a PhD student at the Institute, also talks about his research putting bone cells through Boot Camp to try and build stronger skeletons and better treatments for bone disease. 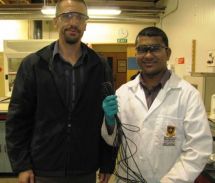 We're used to plastics made from petrochemicals, and even some produced from starches, but a University of Waikato team is investigating ways of producing bioplastic from protein - specifically, from proteins contained in blood. At the moment blood from abattoirs is turned into bloodmeal and sold as low-cost fertiliser, but team leader, engineer Johan Verbeek, hopes that converting bloodmeal into a plastic-type polymer could create a much higher value product. Potential end uses for the product include planting containers, and, if a way can be found to produce a thin film, silage wrap or mulch film. Johan Verbeek, pictured above on left, stands next to student Velram Mohan who is holding thin extruded 'spahgetti' strands of bioplastic.

Student Talia Hicks has been investigating the biodegradability of the bioplastic, while fellow student Aaron Lowe has been working at reducing the odour of 'blood plastic' and removing colour so that dying becomes an option. Johan Verbeek won a Bayer Innovators Award in 2008 for his work turning waste materials into new products, and a start-up company, Novatein, has already been established to patent and commercial the innovative new process.

Left: Aaron Lowe and Velram Mohan holding bloodmeal: the yellow sample on the left has been de-coloured, while the dark red sample on the right is the bloodmeal's original state. Right: Talia Hicks next to an injection moulding machine (Images: A. Ballance)

Darren Harpur of Waikatolink talks about working with university scientists to commercialise their research.

Beeswax as a Drug Delivery System

University of Waikato chemist Michael Mucalo(pictured at left with Ho Ying Yuen. Image: University of Waikato) is another researcher whose work on biomedicals has strong commercial potential, and who has strong connections with Waikatolink. One of his interests is drug delivery systems, and he has been developing a drug-release medium that could work to slowly release drugs in the complex chemical environment of a cow rumen. Third year chemistry student Ho Ying Yuen had a summer placement investigating combining beeswax with the more traditional polyethylene-oxide (PEO) and she explains the research process. Michael Mucalo also talks about another of his interests, biomedicals, and in particular the potential for waste cattle bone to be processed in such a way that it could be used in xenografts to help the growth of new bone.