Our Changing World for Thursday 22 July 2010

Children round the world are often treated for what is commonly known as "lazy eye" by placing a patch over one eye. More correctly called amblyopia, the condition isn't actually caused by a physical problem with the eye itself, but a problem with how the brain is processing the sensory information from the "bad" eye. 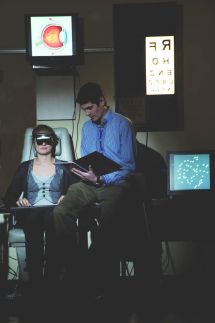 Until recently it was thought that adults with ambylopia were untreatable, but University of Auckland's Ben Thompson (pictured left) and Joanna Black are trialling techniques to help adults with amblyopia who weren't treated as children, and believe the condition can be used as a model for retraining the adult brain, as well as providing new insights into brain plasticity.

To see what techniques they're using, Ruth Beran goes to the University of Auckland's Visual Neuroscience Research Laboratory, but first meets one of the participants in their trial, Olivia Hale.

If you have amblyopia, and would like to be part of the trials mentioned in this story, please contact Ben Thompson.

The videos below demonstrate what participants in trials would see on the virtual reality goggles. The different videos show varying contrast as presented to the good eye and the amblyopic eye, with the amblyopic eye seeing the bright dots (100% contrast) and the good eye seeing the dimmer, lower contrast dots, ranging from 20 to 100% contrast, as shown in the different videos.

The supercomputer being delivered, and inside one of the computing nodes (images: NIWA)

Named FitzRoy, in honour of pioneering meteorologist and former Governor of New Zealand Robert Fitzroy, NIWA's new supercomputer was officially commissioned today, ushering in a new era of long and short term weather and climate modelling. Capable of 34 trillion calculations a second, the 12.5 tonne IBM capability computer will allow climate modellers to complete an experimental simulation in just one day, compared to the six weeks it has taken up until now. The supercomputer, which along with Weta Digital's six supercomputers is among the world's fastest 500 supercomputers, will also be available to other New Zealand researchers to use via the high-speed Karen network. University of Auckland bioengineers that work as part of the international Physiome project, for instance, co-led by project leader Peter Hunter, will put it to work on creating computer models of the human body. Alison Ballance catches up with NIWA principal scientists Michael Uddstrom and Brett Mullan to find out about the supercomputer's capabilities.

Jevon Longdell, one of the crystals, and the edition of Nature containing the journal article(crystal image: Matthew Sellars)

Quantum computers could massively increase the volumes of information processed by classical computers but before they can become a reality, one thing scientists have to do is find a way of boosting the efficiency of quantum memory.

An international team has done just that, improving efficiency from less than 17 per cent to about 69 per cent, and their research has been published in the journal Nature. Ruth Beran meets one of the authors, University of Otago physicist Jevon Longdell, to see how quantum states of light are being stored on crystals doped with rare earth ions, and how this technology could also be applied to secure telecommunications in the future.

Seed Bank for Grasses and Clovers

The Margot Forde Forage Germplasm Centre, run by Agresearch at its Palmerston North campus, is a treasure trove of more than 65,000 samples of perennial rye grass and clover seeds. The seeds are available to plant breeders in New Zealand and around the world, and the seed bank is both an insurance policy and 'a world of possibility', ensuring that New Zealand farmers will be able to grow the best pasture both now and into the future. Alison Ballance meets 'plant hunters' and curators Kenyon Moore, Warren Williams and Zane Webber to find out more.