Our Changing World for Thursday 8 July 2010

Algal blooms caused by cyanobacteria, or blue-green algae, are often a feature of lakes with high levels of nutrients. As well as being unsightly and smelly, such blooms can sometimes be toxic to humans and animals. Although Lake Rotorua is what Waikato University freshwater scientist David Hamiton calls meso-trophic, meaning its waters contain moderate levels of nutrients, it nonetheless can suffer from algal blooms, especially at the end of summer. A recent mid-winter bloom manifested itself as unusual large turquoise-blue coloured lumps that washed up on the lake shore and resulted in public health warnings. David Hamilton, who holds the Environment Bay of Plenty Chair in Lakes at Waikato University, and visiting scientist Tamar Zohary, who is Head of the Kinneret Limnological Laboratory in Israel, were sent a sample so they could identify the mysterious substance.

Cyanobacteria, or blue-green algae, that were responsible for the scum also featured in this recent Our Changing World story, highlighting their hydrogen-producing capacity. 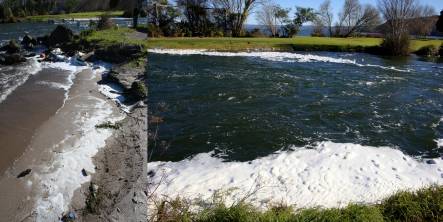 In the second part of this tour of a clinical trials facility which started last week, medical director Alison Luckey shows Ruth Beran around Primorus Clinical Trials, a new research unit based 200 metres from Christchurch Hospital, where human clinical trials are conducted to show that medications are effective and safe for people to use.

During the course of the tour, a participant in the ward area explains what he is doing in a trial, Ruth gets to see where the drugs are stored, and the lab area where blood samples are centrifuged, and Alison Luckey explains why people choose to take part in clinical trials.

For many years we've thought of weta as leaf-eating creatures, unique to New Zealand. But new research is forcing a re-think of these big flightless insects. Steve Trewick from Massey University and the Allan Wilson Centre for Molecular Ecology and Evolution is interested in tree weta for a variety of reasons. Among them, the insight their distribution can shed both on the recent climate history of New Zealand, as well as its older geological past. He has also been experimentally testing new suggestions that weta may have mutualistic associations with some fruit. Alison Ballance tracks him down in Palmerston North to find out more.

John Field and his telescope, a region of star birth in Sagittarius, the backyard observatory (images: John Field)

Astronomy is one of only a handful of scientific areas where amateurs can make a real difference, others include fossil hunting, and identifying new species.

John Field is a programmes officer at Wellington's Carter Observatory by day, but at night he spends as much time as he can in his own backyard observatory.

Ruth Beran goes to his home in Stokes Valley, to see stars like Alpha Crucis in the Southern Cross and the planet Saturn. She also gets some advice on the best way for a novice, to look at the night sky.