Our Changing World for Thursday 17 June 2010

At the University of Canterbury there is an ultraviolet laser which produces a beam of light a billion times the intensity of the sun, so intense it can evaporate refractory metals, like platinum, titanium, or zirconium, which all need to be heated above at least 2,000°C to melt.

Roger Reeves(pictured above) heads a team which includes Ian Farrell and Young-Wook Song from the Department of Physics and Astronomy. The scientists use the laser to make thin films with the aim of creating better optoelectronic devices like LEDs, laser diodes and solar panels.

Ruth Beran meets him the laboratory to see the laser put through its paces.

Cyanobacteria As A Potential Biofuel

They've been described as the 'architects of the atmosphere' for their role in producing the oxygen that enabled life to evolve and thrive on Earth. Now they are in the spotlight for their ability to produce hydrogen and ethanol that could be used as biofuel. Cyanobacteria, or blue-green algae, are microscopic in size, but are widespread and abundant, occurring in just about every sort of habitat, including the Antarctic and geothermal areas. The most familiar form of cyanobacteria is the food supplement spirulina. 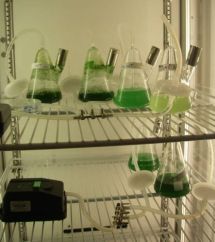 University of Otago botanist Tina Summerfield is using genetic tools to look for novel strains of cyanobacteria in New Zealand, and is investigating in the lab the conditions of growth under which these microscopic plants produce the most hydrogen. She shows Alison Ballance some of the cultures of cyanobacteria growing in growth cabinets in the lab (Left. Image: A. Ballance), and explains her work.

In 2008 Tina was awarded a 3-year Foundation for Research, Science and Technology postdoctoral fellowship, and was also the recipient of the 2008 NZ Society of Plant Biologists Roger Slack Award in Plant Biology. 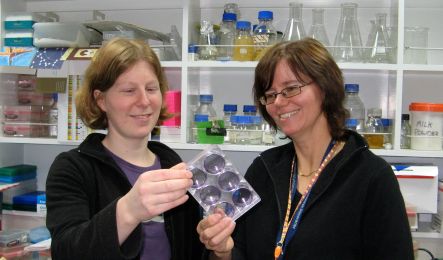 Imagine if curing cancer was as simple as taking a pain reliever, like a paracetamol tablet. Gabi Dachs(picture right) and Michelle Hunt (pictured left) from the Angiogenesis Research Group at the University of Otago, Christchurch are trying to develop a treatment for cancerous tumours which would do exactly that.

The scientists first insert a gene into blood vessels, for example the vessels providing blood to a tumour. When presented with an innocuous drug, such as an antibiotic, the gene turns the so called "pro-drug" into a toxin.

Gabi Dachs has already had some success in limiting the growth of tumours in pre-clinical models. The method they are researching at the moment takes a gene from the bacteria E. coli and combines it with a drug commonly used to treat severe bacterial infections, metronidazole (Flagyl). Previously, a gene from horseradish was used with the drug paracetamol, but this combination was not fast or efficient enough. 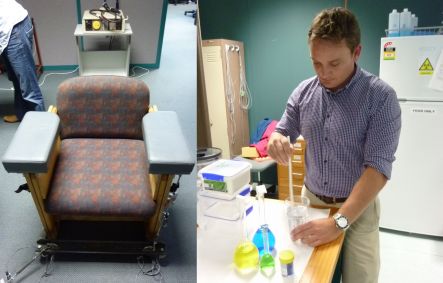 The role of carbohydrates as a main source of fuel for the body is well established, but what is less well known (and not at all well understood) is that just the taste of carbs can improve physical strength and muscular performance. It's extraordinary, but it's also true - but the real question is; how?

Nicholas Gant, Cathy Stinear and Winston D. Byblow at Auckland University's Department of Sport and Exercise Science think they know the answer. They're the first in the world to identify a previously unknown neural pathway between receptors in the mouth and those parts of the brain that control muscle activity. And the experiments they run to find this pathway are pretty rigorous, involving deliberately fatiguing participants by lifting weights for up to half an hour. Justin Gregory volunteered to be a guinea pig at the researcher's lab at the university's Tamaki campus.