Our Changing World for Thursday 10 June 2010 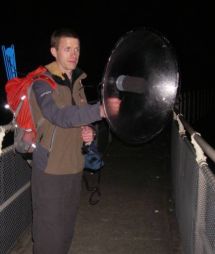 Victoria University PhD student Andrew Digby's area of research is acoustic ecology, focusing on recording and analysing the calls of little spotted kiwi. He is looking to answer questions such as: can you recognise individual kiwi from their calls, and do different populations of kiwi have distinct dialects, and is this related to their genetic make-up. As well as using a parabola microphone to record single calls (Left. Image: A. Ballance), he uses automatic recorders that record all night so he can work out whether the rates of calling vary according to time of night, moon phase and time of year. He also intends to set up microphone arrays, that can be used to determine distances, to work out exactly where kiwi call from within their territories. His main field site is Zealandia, the Karori Wildlife Sanctuary in Wellington, and he is also studying other wild populations as a comparison.

Zealandia offers night tours, with the chance of hearing and seeing kiwi.

From left to right: Carrie Innes, Richard Jones (centre back) and Govinda Poudel, and a participant conducting a joystick task with goggles in an MRI machine.

A microsleep is when a person is completely unresponsive for a few seconds, and often happens after sleep deprivation or while concentrating for long periods of time. People can have a microsleep without even realising that they've drifted off for a brief period of time, which can have serious implications for occupations such as pilots, truck drivers, air-traffic controllers, or even surgeons, where even a tiny lapse can have fatal consequences.

Richard Jones, from the Canterbury District Health Board, the University of Otago, Christchurch, the University of Canterbury, and the Van der Veer Institute for Parkinson's and Brain Research, and team members Carrie Innes and Govinda Poudel, are researching what happens in the brain during a microsleep. To do this, they have developed tasks which can be completed using a joystick in an MRI machine or wearing EEG electrodes. If successful, their research may lead to a device which could prevent people from having microsleeps.

David Crockett on the Taiko Rediscovery

Taiko Camp is the base of the Taiko Trust's field work in the Tuku valley, and includes tall tracking towers (centre) to allow radio-transmittered birds that have been caught at 'the lights' to be tracked back to burrows in the forest (images: A. Ballance)

In the final story from the Chatham Islands, Alison Ballance catches up with the legendary David Crockett while he is making what he thinks is his 86th visit to the island. In the previous two stories in the Chatham Island series we've heard about efforts to save taiko. Sometimes known as magenta petrels, taiko rank with takahe and kakapo as great tales of ornithological mystery and momentous rediscovery. David Crockett's name is inextricably linked with taiko and the work of the Chatham Island Taiko Trust, and he tells the tale of luck, patience and hard work that led him to become involved in what has become a lifelong-passion for one of the world's rarest seabirds (pdf). 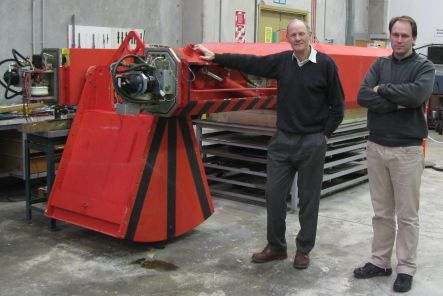 Alister Gardiner (left) and Robert Stuart (right) in front of the wave device in the workshop (image: IRL)

The search is on to find clean, green alternatives for producing energy, and for more than half a decade a consortium of scientists from Industrial Research Limited, the National Institute of Water & Atmospheric Research, and Power Projects Limited have been trying to harness the energy of ocean waves. If successful, the technology could provide New Zealand with another form of renewable energy, but there are still quite a few hurdles to overcome.

Ruth Beran meets with IRL's Alister Gardiner and Robert Stuart, who show her the latest prototype in the workshop.

Our Changing World featured a story on the previous wave power prototype in 2008, which can be heard here.