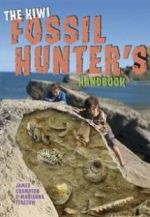 Fossils can provide scientific information on evolution, extinction, ecology, climate change and continental drift, and after years of being asked where to find fossils in New Zealand, GNS Science's Marianna Terezow and James Crampton, have written a new book called The Kiwi Fossil Hunter's Handbook (pdf).

Ruth Beran goes with them to Hurupi Stream, one of the locations featured in the book, together with James' two children, Luca and Charlotte Crampton, to search for fossils.

Listen to James Crampton being interviewed by Kim Hill about the new book here.

From left to right, Chris Varoy, PhD student Nicola Winch and Andy Edgar in the glass-making laboratory with the glove box in the foreground; and a garden water pump recorded in an imaging plate using x-rays, showing bent rubber blades and trapped gravel.

Andy Edgar and Chris Varoy from Victoria University's Radiation Imaging and Detection Group are developing new glasses and glass ceramics which can store radiation so that the image is held like invisible ink and then retrieved digitally later. The materials can detect X-rays, gamma rays and neutrons, and can be used for recording images of objects placed in X-ray or neutron beams. While there are similar products already on the market, the group is trying to improve them. As Ruth Beran finds out, the materials are batched and poured in an inert, un-reactive environment of dry argon or nitrogen gas in a "glove box".

Craig Stevens is a physicist and oceanographer working with NIWA. He is also interested in renewable marine energy, especially the possibility of extracting energy from tidal currents in places such as Cook Strait. His speciality is the science of boundary layers, especially as it relates to turbulence, stratification, and waves. Boundary layers are where water flows across a rock, for instance, or meets air.

He spoke at the recent AWATEA Marine Energy conference in Wellington about how his work on the physics of tidal flow will help the designers of marine tidal turbines understand how to build them to cope with issues such as water turbulence in what Craig Stevens describes as one of the 'energetic environments' on earth. He talks with Alison Ballance about his recent work in the Karori Rip, and about the equipment they will be installing this winter for the next stage of their research.

Laser scan in progress (note white dots on tree trunk) and a dendroglyph in good condition (images: A. Ballance)

A team of University of Otago surveyors are working with the Department of Conservation and Chatham Island Moriori to collect detailed 3D laser scans of the tree carvings or dendroglyphs in the Haupupu Reserve. The 170 or so sacred carvings - known as manu moriori or rakau momori - are believed to be 200-400 years old, and are carved on living kopi, or karaka, trees. However many of the trees are dying, and the carvings are disappearing, so the detailed scans are a way of recording them for posterity. The University of Otago surveying team comprised Richard Hemi, Joseph Wright, David Shearer and Fraser Jopson (PDF), and the project also involved Ken Hunt from the Department of Conservation, and DoC historian Richard Nester. 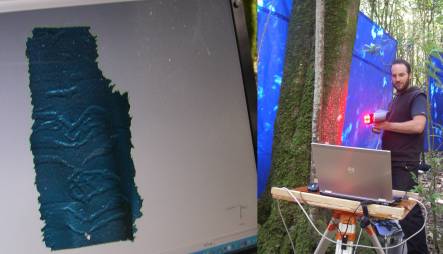 3D digital scan of a dendroglyph, and scan in progress - the laser light is red (images: A. Ballance)

The book 'Manu Moriori - human and bird carvings on live kopi trees on the Chatham Islands' by Rhys Richard, is published by Paremata Press 2007, and is available from 73 Seaview Road, Paremata, Porirua 5024 for $40 (includes postage).

DoC's Ken Hunt and Richard Nester next to a fallen rotten tree with a carving that was scanned in the nick of time, and Richard Hemi next to a standing dead tree with several carvings (images: A. Ballance)