Nancy Beavan Athfield became involved in a Cambodian archaeological project seeking to understand mysterious burial jars almost by accident, when she was asked by a television documentary crew whether she could provide a radiocarbon date for a piece of bone within just three weeks. Since then her fascination with the project has seen her return again and again to various sites in Cambodia, most recently in January this year to a site near Phnom Pel, where she is working with local archaeologists and a University of Sydney team which recently received an Australian Research Grant to support the work. The burial sites are on remote high ledges deep in the jungle, and comprise earthenware pots and wooden coffins, each packed with clean bones from a number of human skeletons. No one knows who the people were, although radiocarbon dates suggest the remains date back to between1440-1630 AD.

Nancy Beavan Athfield is a senior scientist at GNS Science's Rafter Radiocarbon Laboratory in Gracefield, and she shares her fascination with the Cambodian project with Alison Ballance, and explains the process for getting a radiocarbon date from a sample of bone.

The burial site at Phnom Pel can be visited through a community based eco-tourism operation at the village of Chi Phat. 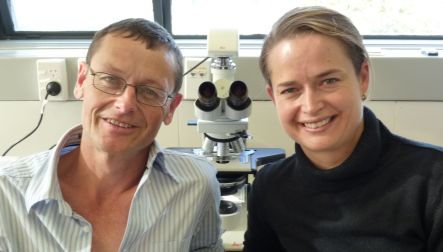 The recent eruption in Iceland clearly showed what impact volcanoes can have on air traffic. Planes have been brought to a standstill for fear of the potential damage to engines caused by tiny 'glass' particles in the volcanic ash.

New Zealand has its own fair share of volcanoes, demonstrated by the violent eruption of Mount Ruapehu in 1996, which also disrupted air travel.

While there were other impacts nearby, it was generally thought that cities like Auckland and Hamilton, were too far away from Mount Ruapehu to be effected, particularly because most residents of these cities did not see any volcanic ash in the air.

Not so, according to a paper recently published in Atmospheric Environment by Victoria University's Rewi Newnham (pictured left), University of Auckland's Kim Dirks (pictured right) and Dan Samaranayake from the Ministry of Health, which shows that diffuse fine volcanic ash does pose a risk to respiratory health to cities some distance away from the source.

Cooks Scurvy Grass on the Chathams 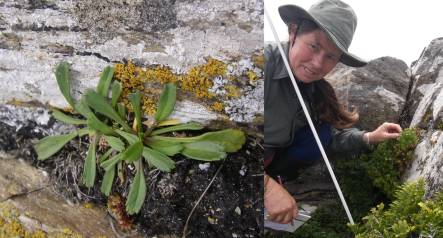 Juvenile Cooks scurvy grass, and Amanda Baird with her hand on a healthy adult plant growing next to a penguin burrow; the white pole marks the site (images: A. Ballance)

Rare plant botanist Amanda Baird works for the Department of Conservation on the Chatham Islands. Each summer she carries out monitoring of populations of ten or so highly threatened plants. Her smallest subject is Cooks scurvy grass (Lepidium oleraceum), which ranges in size from 1 centimetre midgets to flourishing adults that span a dinner plate. Cooks scurvy grass grows in narrow cracks on schist rocks almost at sea level, in locations highly exposed to salt and sea spray. The plants thrive in nutrient-rich locations such as seal colonies and shag colonies, and are highly threatened by grazing and browsing from introduced animals such as sheep and possums. Alison Ballance joins her to monitor plants at a number of sites on a small island at Point Munning, in the northeast of the main Chatham Island. Three forms of Cooks scurvy grass are found in the Chathams, with the Point Munning form known as 'B'. Amanda Baird was awarded the Loder Cup in 2007 for outstanding services to flora conservation. Cooks scurvy grass is named after Captain Cook, who fed the plant to his ship crews to prevent scurvy.

Tour of a Pathology Laboratory - Part 1

Aotea Pathology is a Wellington-based community pathology lab which processes approximately 3000 patients, and 10,000 tests, every day. In the first of a three part series, CEO Karen Wood takes Ruth Beran on a tour of the laboratory where she meets Max Reed in the chemistry department, Alex Beavis in haematology, James McLeod explains how the digital cell sorting programme CellaVision works, and cytologist Jennifer Sigley demonstrates new techniques used for analysing cervical smears.