Our Changing World for Thursday 4 March 2010

Ecology professor Steve Wratten(above left, with Jean Tomkins) leads a team of Lincoln University researchers who are collaborating with wineries from the Waiapara region in north Canterbury in a project called Greening Waipara. The programme aims to increase biodiversity in vineyards, with a view to improving biocontrol to manage pests and diseases. Many of the vineyards have planted native plants and established biodiversity trails on the edges of the vineyards (Torlesse Wines biodiversity trail, pictured above right). Some vineyards such as Torlesse Wines and Mud House are trialling the use of perennial native groundcover under the vines, while others such as Muddy Water are planting exotic annual cover crops such as buckwheat or Phacelia.

The basic idea is that these flowering plants encourage the presence of beneficial insects such as hoverflies and ladybirds that provide pest control services by providing them with SNAP: Shelter, Nectar, Alternative prey and Pollen. 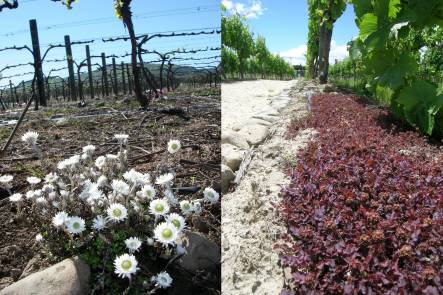 University of Canterbury botany professor Dave Kelly has spent more than 20 years looking at the phenomenon of mass flowering and seeding in New Zealand native plants, especially in Chionochloa snow tussocks, and the longer he studies them the more complexity he discovers. Snow tussocks flower and seed profusely in some years and hardly at all in others, with a warmer than average period in January and early February one year triggering flowering the following summer. This irregular flowering has evolved in an attempt to outwit three species of herbivorous insects that are seed predators, and in this evolutionary battle of wits the two fly species and one moth species have each developed their own strategies for coping with an unreliable food supply, as well as a suite of eight parasitic insects. 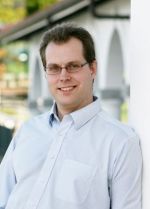 Massey University'sMatthias Lein (left) is a computational chemist. Using quantum mechanical laws, he solves chemical equations for experimental chemists who know the chemicals that have gone into the reaction, and can determine what has been produced, but are unsure what's actually happened during the process. In particular, Matthias Lein is interested in chemical reactions that use gold as the catalyst, and to solve these chemical reactions, he uses the enormous computing power of a Massey University's Auckland-based supercomputer. (image: David Wiltshire, Massey University)

Right: an animation of one of the chemical reactions Matthias Lein has solved.

View a higher resolution version of this animation. 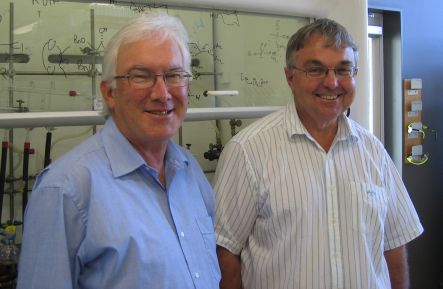 Enzymes are proteins that speed up chemical reactions in biology. Many pharmaceuticals are based on molecules that bind to enzymes and stop them from functioning, otherwise known as enzyme inhibitors.

At Industrial Research Limited, Richard Furneaux (left) and Peter Tyler (right) are developing new enzyme inhibitors to target conditions ranging from cancer to malaria to gout. Some of the compounds they developed are currently in human trials.

Ruth Beran meets them in the lab where she finds out what an enzyme inhibitor actually is, and in the process gets to see a Nuclear Magnetic Resonance (or NMR) machine, where the compounds are analysed.