Our Changing World for Thursday 11 March 2010 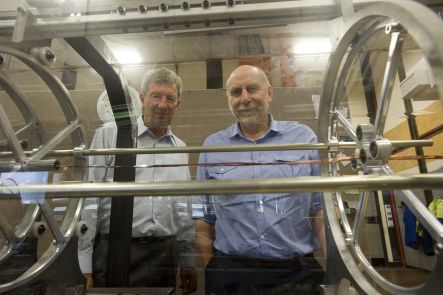 On Tuesday 9 March, Bob Buckley (right) and Jeff Tallon (left) from Industrial Research Limited were awarded the Prime Minister's Science Prize for their work on high temperature superconductors. The prize is worth $500,000, with $400,000 of it going to IRL for continued development of the technology.

Unlike conventional copper wires, superconductors allow electricity to flow without resistance or loss of energy. They are used in MRI machines, for power transmission and even to levitate trains. Superconductivity brings quantum mechanics to the everyday scale, but exactly how high temperature superconductors work at the quantum level is poorly understood.

Ruth Beran caught up with one half of the winning team, Jeff Tallon, to find out more. Listen to a previous interview with Bob Buckley here.

John Zeldis (left) and David Schiel (second from right) with researchers looking at the Heathcote Estuary before the wastewater diversion; a thick mat of rotting sea lettuce in the estuary (images: A. Ballance)

Christchurch's Heathcote Estuary has long been a dumping ground for the city's sewage and wastewater. But that is about to change this month when the long-awaited 3-kilometre long ocean outfall finally begins operating.

What will this change mean for the estuary? Will fewer nutrients mean, for instance, the end of foul-smelling piles of rotting sea lettuce? David Schiel from the University of Canterbury and John Zeldis from NIWA lead an inter-disciplinary study which is measuring the before- and after-effects of the wastewater diversion. The Heathcote Estuary study is part of a FORST-funded project (2009) entitled: "After the outfall: reversal of eutrophication and the rehabilitation and recovery of a degraded urban estuary"

Alison Ballance joined them on the Brighton foreshore at low-tide to walk the estuary for herself, and observe some of the science taking place out on the mudflats.

As we bask in a late hot summer, spare a thought for a team of whale researchers who have spent the last 5 weeks battling bad weather in iceberg-filled seas around Antarctica.

The joint Australia-New Zealand Antarctic Whale Expedition has been conducting non-lethal research into whales, and the just-completed expedition has managed to attach 29 satellite transmitters to whales. The aim of the expedition was to improve understanding of the population structure, abundance, trends, distribution and ecological role of whales in the Southern Ocean, using state of the art non-lethal research techniques such as biopsy sampling, satellite tagging and acoustic and hydrographic surveys, focusing particularly on humpback, minke, blue and fin whales.

This was the first major voyage of the Southern Ocean Research Partnership (SORP), a 5-year multinational collaboration on whale research in the Southern Ocean. SORP's aim is to develop a multi-lateral, non-lethal scientific research program that will improve the coordinated and cooperative delivery of science to the International Whaling Commission.

Alison Ballance went on board NIWA's research ship Tangaroa the day before she was due to sail south, to talk with expedition leader Nick Gales, leader of the Australian Marine Mammal Centre, based at the Australian Antarctic Division in Hobart and University of Auckland scientist Rochelle Constantine.

The Human Brain Bank and Cell Migration in the Brain

In the lead up to Brain Awareness Week, Our Changing World runs the first of a two-part series on the most complex organ in the human body - the brain. 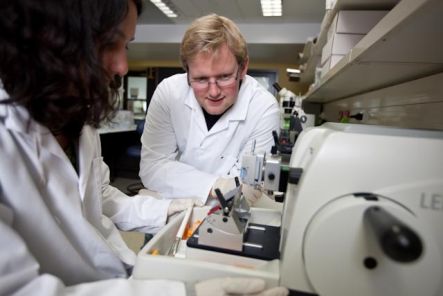 The Human Brain Bank is located at the University of Auckland's Centre for Brain Research and researchers can use the tissue samples from bequeathed brains stored there to study neurodegenerative diseases like Alzheimer's, Huntington's, and Parkinson's.

Maurice Curtis (above) lets Ruth Beran to take a peek inside the bank, and describes his research into neurogenesis - or the growing of new brain cells.

To find out more about events around New Zealand during Brain Awareness Week, click here.