Our Changing World for Thursday 18 February 2010

In the Physics Department, at the University of Auckland, the coldest thing in the universe is being created. 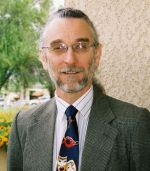 Using lasers, mirrors, vacuum tubes and computers, scientists can take the temperature of a bunch of atoms a whisper away from absolute zero (-273°C).

The result is something called a Bose-Einstein Condensate and the physicists who created the first one were awarded the Nobel Prize in 2001.

Maarten Hoogerland and Howard Carmichael (left) explain how these condensates are being used to study the wave-particle duality of atoms, and Ruth Beran watches as one is created in the lab. (image: The Optical Society of America) 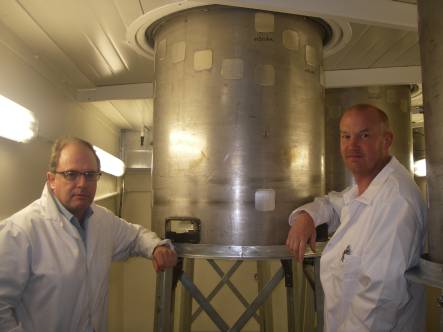 Leo Condron (left) and Stuart Larsen with a rhizotron container in the 'underground' part of the Biotron (image: A. Ballance)

The New Zealand Biotron is situated at Lincoln University, and is operated by the Bioprotection Research Centre, a centre of research excellence. The two-storey facility allows researchers interested in plant-soil interactions to simulate real field conditions in the lab. It has growth chambers on the top floor, with soil-containing rhizotrons housed in separate air-conditioned rooms on the ground floor. A rhizotron is a core of soil encased in a heavy steel container. Small portals around the side of the container allow researchers to collect soil samples, and insert measuring and recording instruments. Soil scientist Leo Condron from Lincoln University, and Biotron manager Stuart Larsen give Alison Ballance a tour of the unique, purpose-built facility that was opened in 2004.

Electrical Activity of the Stomach 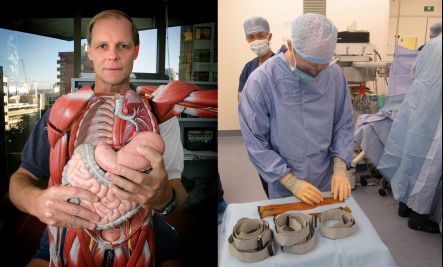 University of Auckland's Andrew Pullan (left), Peng Du (middle back) and Greg O'Grady (right) are using custom-made flexible electrodes to measure the electrical activity of both healthy and diseased stomachs.

The new method they have developed may eventually allow gastric pacemakers to do for the stomach what artificial cardiac pacemakers have done for the heart. Once analysed, the results may also to provide insights into conditions like gastroparesis and a better model of stomach activity.

Their work has been recognised recently with awards last year at international conferences. Peng Du won the top student award at the IEEE Engineering in Medicine and Biology conference in Minnesota, United States and Greg O'Grady won Best Young Investigator and Best Abstract at the Joint International Neurogastroenterology and Motility meeting in Chicago, Illinois.

Peter Matthews is an enthnobotanist at the National Museum of Ethnology based in Osaka, Japan. As part of his research he gets to travel to different countries and observe as people cook for him.

Particularly interested in the history of taro, he is using methods including language, genetics and the traditions surrounding cooking of the crop, to trace how it's moved around the globe, and the relationship between the plant and different peoples.

He has also created a social network site called The Research Cooperative, a non-profit organisation which supports young researchers by providing an international meeting place for researchers, editors, translators, publishers, and others.

Ruth Beran visits him at his family home in Auckland where he cooks her a meal made from the very crop he's been studying for so many years.

A farmer carrying taro and sugarcane; the poisonous outer skin of taro being peeled off; and cooking taro and other food wrapped in banana leaves in a ground oven. (images: Peter Matthews)