Our Changing World for Thursday 11 February 2010

In 1981, when the Department of Conservation began intensive management of black stilts, or kaki, in the Mackenzie Basin, there were just 23 birds left in the wild. Now there are about 94 adults and sub-adults in the wild, with a few pairs that are part of the captive breeding programme which has been the core of efforts to save the black stilt. Every year the black stilt recovery team try to find all eggs laid by black stilts in the wild, and bring them into captivity to rear in safety. They can rear up to 100 chicks a year, and most are released back into the wild in spring. Introduced predators are the main threat to kaki, although modification of their braided river habitat by hydro-electric power generation and the growth of weeds on river beds have also had an impact. Dean Nelson takes Alison Ballance on a tour of the black stilt captive breeding facility near Twizel.

The recent special edition of the New Zealand Journal of Ecology titled 'Feathers to Fur: the ecological transformation of Aotearoa', includes a number of papers that reassess our understanding of New Zealand and its ecology. Among them was a paper by Matt McGlone et al called 'Comparative biogeography of New Zealand trees: species richness, height, leaf traits and range sizes.' Alison Ballance talks with botanist Matt McGlone, who is Science Leader for the Biodiversity and Conservation programme at Landcare Research, about how many tree species there are in New Zealand, and some of their other features such as height, leaf size and deciduousness.

The University of Auckland'sPeter Metcalf is studying something quite mysterious. With Elaine Chiu, and collaborators around the world, he's looking at tiny protein crystals containing very particular viruses.

Discovered over a century ago, it took decades for scientists to work out what these crystals contained, and even now some secrets remain. Using synchrotron light, they are the smallest crystals to be diffracted, and if their unique properties were replicated in the lab, they could form the basis of things like stable vaccines without refridgeration or even protein computers. 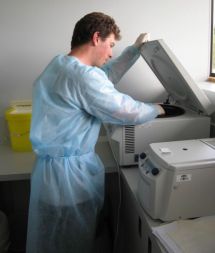 For the past two years, PhD student David Rotherham (left) from the University of Auckland has been working on techniques using DNA microsatellites to trace plants like cannabis, illegally logged timber, and pollen back to their source.

Ruth Beran meets him in the lab at Environmental Science & Research where she gets to see some of the samples he keeps under lock and key.

This is the last in a series of three stories on the forensic lab at ESR. The first was about ageing stains made by bodily fluids and the second was about identifying illegal wildlife imports. (image: ESR)