Our Changing World for Thursday 4 February 2010

Mechanics of the Heart

In the basement of the Medical and Health Sciences Building at the University of Auckland is a Magnetic Resonance Imaging (or MRI) machine.

Patients from Auckland City Hospital are often taken through the connecting tunnel under the road to the Centre for Advanced Magnetic Resonance Imaging (CAMRI) to be scanned, but the machine is also used for experimental purposes by scientists like Alistair Young.

He's particularly interested in measuring the heart, and tests new software developed for MRI machines to see if the computer programmes actually work. He is also one of the people involved in creating the Auckland Cardiac Atlas. Ruth Beran watches the process as healthy volunteer Jichao Zhao is imaged.

Project River Recovery began in 1991, with the aim of restoring wetland and river habitats in the upper Waitaki Basin. Funding comes from Meridian Energy, in compensation for the ecological impacts of hydro-electric development in the Mackenzie Basin. Project River Recovery is managed by the Department of Conservation, and weed control of species such as willows and lupins, and predator control are two main areas of focus. Project manager Chris Woolmore took Alison Ballance to see a colony of black-fronted terns in the upper Ohau River, where Project River Recovery has just begun an intensive predator trapping programme. Black-fronted terns breed inland, and are thought to number just 5000 birds.

Chris Woolmore in the upper Ohau River - the black-fronted tern colony is on the island on the far side of the river; cushion plant (images: A. Ballance) 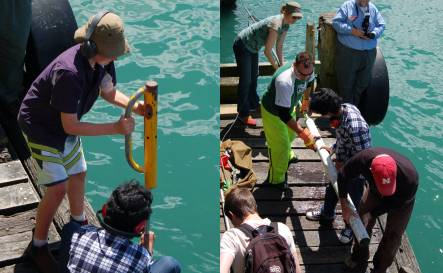 GNS Science organised a geology summer school called 'Discover Ancient Worlds', for 12-15 year olds, based around the Wellington visit of the Integrated Ocean Drilling Programme ship the JOIDES Resolution. Run in conjunction with Capital E and the Museum of Wellington City and Sea, 20 students took part in the week-long course. As well as getting a tour of the ship, the students learnt about rocks, collected their own sediment core next to the Petone Wharf, and took it back to GNS Science in the Hutt Valley to analyse. The course was run by Dr Richard Levy, with help from various GNS scientists. 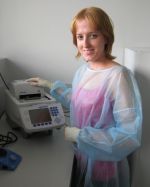 Under the Convention on International Trade in Endangered Species of Wild Fauna and Flora (CITES) and associated New Zealand legislation it is illegal to import endangered wildlife into the country without the right permit.

Over the last year, Masters of Forensic Science student Jacqui MacCallum (left, image: ESR) from the University of Auckland has been developing techniques to detect internationally protected wildlife, such as bear, tiger, rhinoceros, seahorse and musk deer, in imported traditional medicines.

Ruth Beran meets her in the lab at Environmental Science & Research where she shows her some of the samples she has been analysing.

This is the second in a series of three stories on the forensic lab at ESR. The first was about ageing stains made by bodily fluids and the next story will focus on tracing plants such as cannabis back to the source.