Our Changing World for Thursday 17 September 2009

The theme of this year's Conservation Week is 'Get Involved - Kia Mahia te Mahi'. It's all about celebrating the efforts that thousands of volunteers and community groups put in to help conservation work in New Zealand. Our Changing World went out to find what conservation volunteers get up to, and what motivates them.

Changing sugar water at a feeding station for stitchbirds and bellbirds, and a cart made from an old pram, built by the Wednesday Working Group (right).

Ten years ago a predator-proof fence was erected around an area of bush in central Wellington, and the result was the Karori Sanctuary. Today more than 400 volunteers help out at the sanctuary in many varied ways, and Alison Ballance headed there to catch up with members of the fence monitoring group, the Wednesday Work Group and 'avi-aid', the bird feeders.

Polysomnography is one way to comprehensively measure the structure of sleep. Ruth Beran went to Massey University's Sleep/Wake Research Centre to find out how scientists analyse sleep, and Leigh Signal attached electrodes to Ruth's head so she could see her brain activity, eye movements and muscle activity.

Testing the sleep of long-haul airline pilots and pregnant women 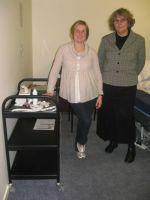 Massey University's Leigh Signal (left) and Philippa Gander (right) also outlined some studies they have conducted into the sleep of long-haul pilots. Alertness is crucial for pilots in flight, particularly when landing a plane after flights which can now last 16 hours or longer. These studies have been looking at the duration and structure of pilots' sleep, and trying to determine what might be affecting the quality of sleep during flight.

Some of the 450 plants ready for planting at Paremata Flats Reserve, tree planter Claire Ballance with kowhai trees, and the planting day in full swing.

In the second of this episode's Conservation Week stories, Alison Ballance headed to Nelson. First up she was off to the Paremata Flats Reserve on the shores of Delaware Inlet, to join Julie McLintock and more than 30 Forest and Bird members and Cable Bay locals on a tree planting day. Then she was off to find out about trapping predators. Earlier this year Don Sullivan and a team of 30 trappers were awarded Forest and Bird's Pestbuster award for their efforts in trapping predators at four forest sites around Nelson. According to Forest and Bird they trapped 530 pests in the year to 1 May 2009 and are already hearing the benefits of their work with increased birdsong. The team's tally for the year was 234 possums, 204 rats, 69 mice, 14 hedgehogs, six stoats and three weasels using 325 traps. Don has also spent much time and his own money building 1000 traps, some of which he has given to other pest control groups. Alison caught up with Don and the Marsden Valley trapping group.