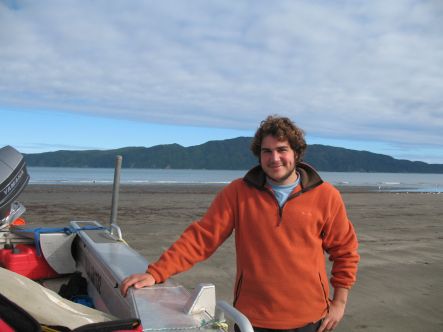 Marine organisms reproduce by sending larvae into the water. It was thought that larvae disperse over a large area, floating freely on the ocean currents, and marine populations have therefore traditionally been considered "open populations" with a continuous exchange of larvae between populations. But this view has recently been challenged by a number of researchers who report far less dispersal than previously predicted for many species. 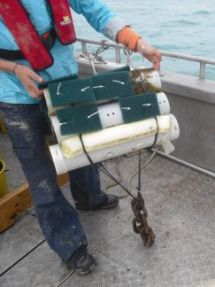 The Kapiti coast, north of Wellington, represents a perfect natural test ground to study larval dispersal. Pelayo Salinas (pictured above) has set up a large-scale experiment there to investigate how far larvae travel, with a focus on larvae of common intertidal periwinkles. Several recruitment stations were deployed from Kapiti Island towards the Taranaki coast and these floating stations have settlement panels (pictured on the left) attached for larvae to settle and metamorphose into juveniles.

This research has serious implications for the government's plan to set up a network of marine reserves around the country. The New Zealand Biodiversity Strategy's goal is to have 10% of the marine environment in a network of Marine Protected Areas by 2010. The idea of a network is that different sites can interact and exchange larvae, but if dispersal is less than previously thought, larvae might not be able to bridge the distance between adjacent marine reserves.

The pregnancy test is one of the earliest chemical sensors small and simple enough to be carried out at home. David Williams, a chemist at the University of Auckland, tracks the progress in the development of increasingly smaller sensors that can detect minute amounts of chemicals, and are used to monitor air pollution, other environmental hazards, and would make it possible for people to manage chronic diseases at home. 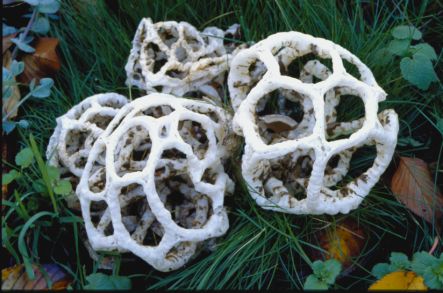 The first Fungal Foray took place 23 years ago, and since then, mycologists have explored a particular part of the country every autumn. This year, the event attracted 50 participants from throughout New Zealand as well as Australia, the US, UK and Japan who descended on the Kapiti Coast to collect fungi in the Tararua Ranges, Rimutaka Forest Park , and other podocarp forest remnants in this area (pictured at the top is a basket fungus, at bottom left Trametes versicolor and at bottom right Pycnoporus coccineus). The Kapiti Coast is an important research area for mycologists as some of the country's earliest collections of fungi originate from there.

Fungi play vital ecological roles, such as breaking down wood and leaves and forming symbiotic partnerships with trees, particularly the southern beech. One in eight of New Zealand's most threatened organisms is a fungus and the week-long Fungal Foray, organised by Landcare Research, aims to increase public appreciation of them, as well a better understanding of the diversity and distribution of New Zealand's native fungi. 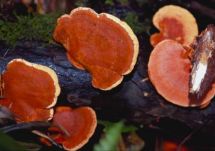 Back in the early days of commercial whaling, there was one kind of whale that the whalers considered the "right whale" to hunt. Often found in coastal waters it was slow moving and easy to catch, and once dead it floated, instead of sinking like so many other species of whales. As a result, the right whales were hunted nearly to extinction. While northern right whales are still in perilously low numbers, southern right whales are making a strong come-back, especially in the subantarctic. Simon Childerhouse is one of the scientists monitoring the species' return. He used to work on marine mammals for the Department of Conservation, and having completed a PhD at the University of Otago he now works at the Australian Marine Mammal Centre, based at the Australian Antarctic Division in Hobart, and is the co-ordinator of the South Pacific Whale Research Consortium.