Our Changing World for Thursday 5 March 2009

Life in the deep ocean 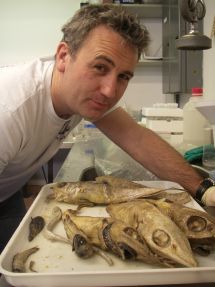 The deep sea is the largest biome on the planet. Deep-sea ecosystems have the largest biomass and largest undiscovered biodiversity of any of the world's biomes. Deep-water fisheries in New Zealand's large Exclusive Economic Fishing zone are worth tens of millions of dollars each year, and include deep-sea fish such as orange roughy, hoki and oreo dories. These fisheries have traditionally been managed as single species, but there is a recent recognition that sustainable fisheries management needs to take into account the whole ecosystem.

Matthew Jones' (pictured on the left) work is part of a new effort to understand the complexity of the deep-sea ecosystem, and focuses on the feeding interactions between predators and prey, and between commercial and non-commercial species. His work has identified about 40 new species, including a new species of cat shark. 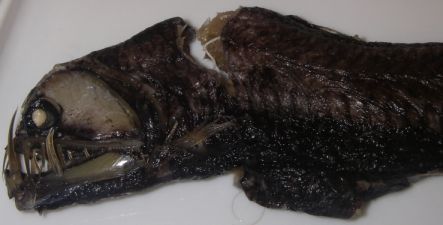 This viper fish has a large bite mark on its back: it was found inside the stomach of another deep sea fish, and in turn its stomach contained yet another, smaller fish. Images: Alison Ballance 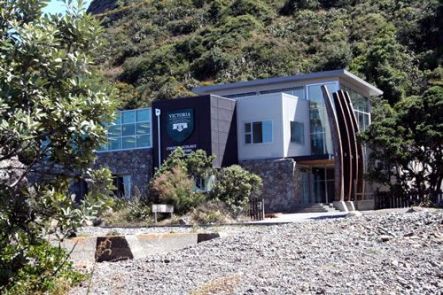 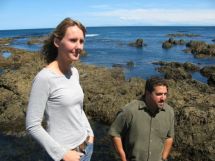 The offspring of most coastal marine organisms - fish and invertebrates - develop in offshore waters for long periods of time. During this time, the young can travel large distances and may never return to their natal stretch of coast or reef. Instead, they may join more distant populations - and this process is what marine ecologists call population connectivity. 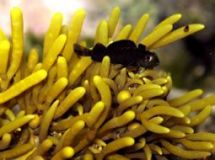 With funding from the Royal Society of New Zealand's Marsden Fund, he and his research team use the commonly found triplefin (pictured on the right; image: Shane Geange) as a model species and they analyse the ear bone (otolith) of juvenile fish for "environmental fingerprints" as markers of their geographic origin. 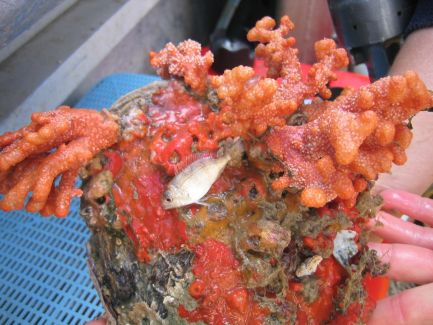 A juvenile snapper near biogenic habitat made up of soft corals attached to a horse mussel. Image: Kerry Webster

Snapper is New Zealand's largest recreational fishery, and one of the country's largest coastal commercial fisheries with an annual export value of $32 million (2008). But in recent years some stocks have failed to recover from historical overfishing, with some commercial catch quotas for snapper being cut recently to protect the species. 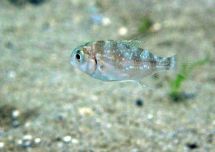 NIWA scientists have discovered that nearly all snapper on the west coast of the North Island come from nurseries in just one harbour. In 2003, they collected juvenile snapper (pictured on the right; image: Crispin Middleton, NIWA) from seven estuaries along the west coast of the North Island. By testing their ear bones (otoliths) for eight different chemical elements, scientists were able to create a 'chemical signature' to identify which estuary the fish came from. They found that 98 percent of the adult snapper were originally juveniles from Kaipara Harbour. NIWA Fisheries Ecologist Mark Morrison says these findings show how fragile some New Zealand snapper and other coastal fish stocks could be. 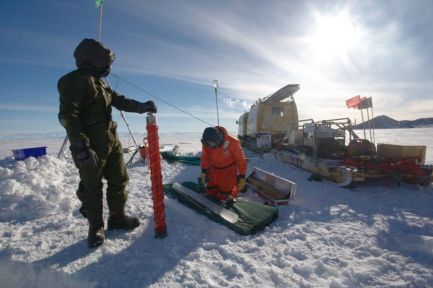 The University of Otago team at work out on the sea ice.

There are three types of ice on Antarctica. The ice sheets are the thickest (up to 4km) and cover the entire continent. Ice shelves are giant slabs of floating ice that stretch out across bays along Antarctica's coast. Sea ice is the blanket of ice that forms around Antarctica when the ocean freezes during winter. 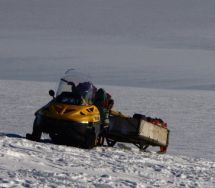 This annual change from dark ocean to white ice plays an important role in global climate, reflecting light from the sun back out into space and influencing how heat and moisture are exchanged between the ocean and atmosphere. Also, as the ocean freezes, it releases brine into the deeper water, which in turn drives global ocean currents. Through this process, Antarctic sea ice contributes to a global ocean current that transports heat around the planet and between the hemispheres.

Most research on sea ice has been carried out in spring, when it begins to break up again, but now a team of scientists from the University of Otago, NIWA, Industrial Research Ltd and Victoria University is focusing on the processes that take place just beneath the sea ice during winter. Two members of the team, Alex Gough and Andy Mahoney, are settling in for a long and dark winter on ice to monitor the start of the planet's biggest seasonal event. The project is funded by the Foundation for Research, Science and Technology as part of New Zealand's contribution to the International Polar Year.