Our Changing World for Thursday 26 February 2009 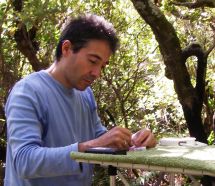 Juan Blanco (pictured on left) is a Spanish scientist involved in breeding programmes for some of the world's most endangered birds. He specialises in the collection and storage of semen, and its use in artificial insemination. He has been involved with Daryl Eason and Ron Moorhouse from the Department of Conservation's National Kakapo team for four years, developing techniques and procedures that will work with kakapo.

The 2009 breeding season marks the first time sperm collection and artificial insemination have been used as a routine management tool to manipulate the genetic diversity of the species. In part three of our kakapo series we focus on a special effort being made to add rare Fiordland genes to the population. Check out the latest news from the breeding season on Whenua Hou-Codfish Island at the kakapo recovery website. 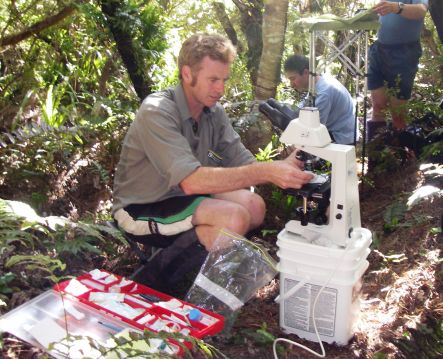 Daryl Eason and others setting up a mobile sperm collection and testing laboratory on Whenua Hou-Codfish Island. Images by Alison Ballance

Evolution of whales and penguins

University of Otago palaeontologist Ewan Fordyce focuses his research on the evolutionary history of New Zealand's fossil vertebrates, particularly of whales and dolphins, based on living and fossil species from around the world, and penguins and reptiles. 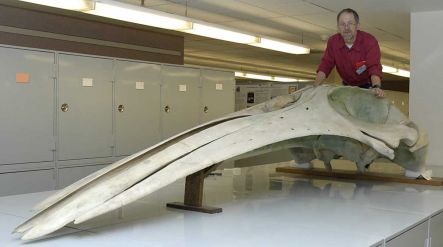 Palaeontologist Ewan Fordyce studies whale fossils and what they tell us about evolution. Image by Nick Pyenson

Modern baleen whales are well adapted to life in the ocean, but they retain some typically mammalian attributes, which point to a distant origin on land. For many years, it was not clear how baleen whales evolved, but the fossil record indicates that he oldest southern filter-feeding whales are transitional between extinct archaic whales and modern baleen whales. They probably filter-fed using teeth, perhaps assisted by "proto-baleen" and evolved during a period when the Southern Ocean was starting to open as a result of continental drift, with changes to climate, water circulation, and oceanic ecosystems. 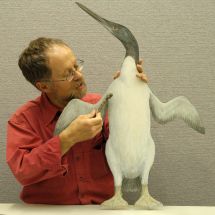 Recent research on fossil penguins discovered a new genus of ancient penguin, Waimanu, from New Zealand rocks some 60-62 million years old. On the left, Ewan Fordyce shows the position of the humerus, or upper wing bone, on a reconstruction of Waimanu tuatahi. The ancient penguins lived in shallow seas off eastern New Zealand in Paleocene times, only a few million years after the extinction of dinosaurs. The research suggests that many groups of living birds originated well back in Cretaceous times, when dinosaurs were thriving - and that many modern lineages have ancient origins. 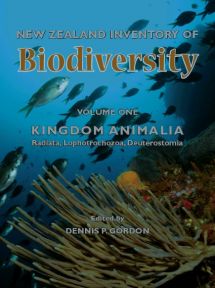 Worldwide, nearly 1.8 million species have been formally named and described since the 1750s, when Carolus Linnaeus, the "father of taxonomy", started this task. However, there is no single place that one can go to look up a list of all those species. For this reason, Species 2000 was launched at a 1996 workshop in Manila, Philippines, with the goal of enumerating all known species of organisms on Earth (animals, plants, fungi, and microbes) into one seamless list - a kind of online telephone directory.

The New Zealand Inventory of Biodiversity, edited by Dennis Gordon, a taxonomist at the National Institute of Water and Atmospheric Research, is the New Zealand contribution to the global catalogue of species. All three volumes are published by Canterbury University Press. Volume I, which focuses on the animal kingdom, goes to press this week and will be in the bookshops in May - but it can be ordered online.

Many threatened native birds have suffered significant losses of genetic diversity since humans arrived in New Zealand. Ian Jamieson and his research team at the University of Otago have been investigating a number of birds, including robins, saddlebacks, mohua and takahe, to find out how inbred they are. Ulva Island, near Halfmoon Bay on Stewart Island, has been a focus of field research for the last nine years, and the in-depth robin study has revealed some surprising findings about the consequences of breeding with one's close relatives.