Our Changing World for Thursday 31 July 2008

Between 1920 and 1983, New Zealand suffered almost 1000 damaging floods, making flooding our most frequent and costliest type of natural disaster. Two-thirds of our population live in areas that are prone to flooding, with 70% of urban areas over 20,000 people contending with river flooding potential. The vast majority of floods are associated with heavy rainfall and New Zealand's topography enhances the effects of wet weather systems - which makes it imperative to have accurate and reliable tools for predicting rainfall, soil saturation and river levels. Amelia Nurse talks to Michael Uddstrom from the National Institute of Water and Atmospheric Research (NIWA) about the development and testing of a new nationwide flood early warning system and to MetService's John Crouch about the difficulties in forecasting small but potentially dangerous weather events such as thunderstorms. 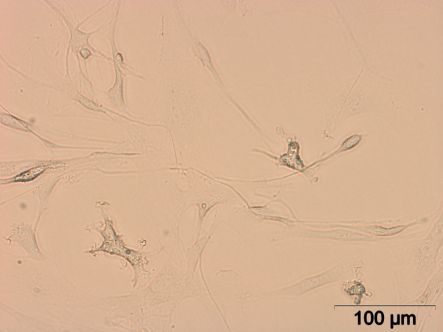 Despite decades of research into cancer, survival rates for patients have changed very little. Remissions are often transient, and many tumours are resistant to chemotherapy drugs and radiation. New evidence suggests this is because current therapies are targeting the wrong cells. Instead of focusing on the rapidly- dividing cells that form the bulk of the tumour, researchers are taking aim at highly-resistant 'cancer stem cells' that give rise to the disease and enable tumours to grow back. Dacia Herbulock spoke to Melanie McConnell of the Malaghan Institute of Medical Research's Cancer Cell Group about the cancer stem cell line she has been able to culture (pictured above and right), and her work on a cancer vaccine.

Two materials chemists at the University of Otago have discovered a wound-healing substance derived from squid that could help people who need sinus surgery. Several thousands of New Zealanders have sinus surgery each year, but one of the complications is a type of scarring known as adhesions, which can block the sinus passage and often requires further operations. Lyall Hanton and Brian Robinson, who are both at the chemistry department, have used a waste product from the squid-fishing industry to develop a gel that shows both anti-bleeding and anti-scarring properties and promotes wound healing. Together with clinical colleagues in Adelaide, the researchers have tested the gel first in sheep and now in patients - with promising results.

New Zealand produce commands a premium price internationally because it's seen as safe and clean, but that also means that it is subject to fraud by producers from other countries. Russell Frew, a chemist at the University of Otago, is using isotopes as a chemical signature to trace anything from meat to fish and wool - and illegal drugs.