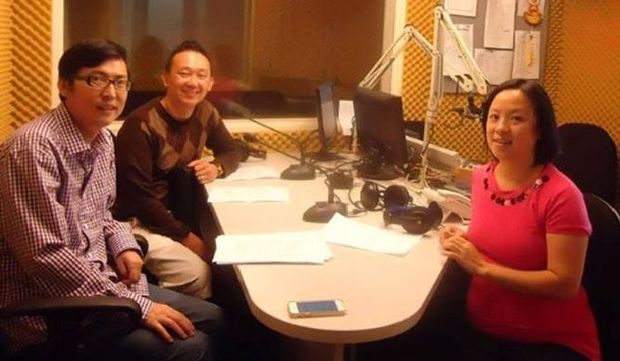 Sheng (Charlie) Tang from the Mental Health Foundation with Ivan Yeo and Eva Chan from Chinese Parent Support Service Trust in the studio for an episode of Unlimited Love.

“It’s the kind of love that signifies respect”

Talking about disability is tricky for lots of people. But for members of the Chinese New Zealand community, it can be especially complicated.

“It’s pretty hard to sum up,” says Ivan Yeo, a social scientist and a central figure in the Unlimited Love campaign that aims to change the way members of his community think about people with disabilities. “Because the culture is such a face-driven value culture, if people have children with disabilities, very likely they will be excluded form a lot of public events. We can see disabled people from New Zealand, but why do we not often see them from Asia?”

Ivan says this exclusion extends to representation in Chinese language media as well and also the dissemination of information about services and support organisations. The reason why, he says, is often to do with shame. But it’s not clear-cut or easily attributed to one single factor.

“Chinese culture is quite diverse. It could be Chinese from Singapore, Malaysia, Taiwan, Hong Kong, to China. We do have certain common values. One of those is about living in your blood, the blood that you need to carry on the generations, and the blood that carries on your family name. Those are very crucial.”

For those Chinese who follow Taoist teachings, the question becomes more complex. On the one hand, there is a suggestion that disability is the result of the bad behaviour of your ancestors which results in the shame and guilt that can be felt by both family members and the disabled person themselves. On the other, some Taoists encourage the idea of acceptance and joy in whatever natural state a person might find themselves to be.

And it isn’t just recent migrants who might feel this way. Ivan says Chinese people’s ability to hold on to their culture means that attitudes can persist for generations.

“I met some Chinese who have been in New Zealand for more than four generations who can still speak fluent Mandarin and Cantonese and still hold Chinese beliefs. And a lot of information that the Government are working really hard to raise public awareness of might not be conveyed into those communities.”

The Unlimited Love campaign is being run by the Chinese Parent Support Service Trust and uses Chinese language media like online forums and newspapers to get their message across. For Ivan, the key element was 13-part radio series on Chinese Voice Radio AM 936 called Unlimited Love. And the response has been overwhelming.

“The way that we have done the radio show is by inviting some of the key agencies that provide disability services. The great thing is that the services are out there. We don’t even have to work from scratch.”