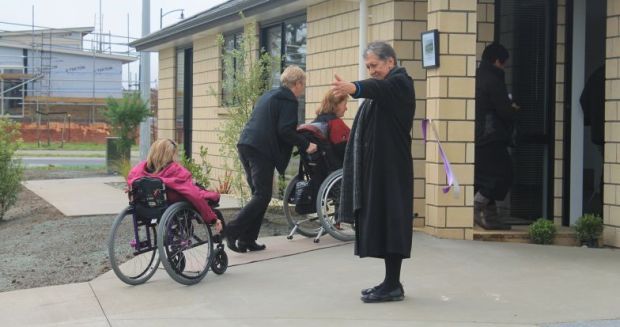 “I felt trapped in my previous home. I had no freedom because I couldn’t get through the doors easily in my wheelchair.” 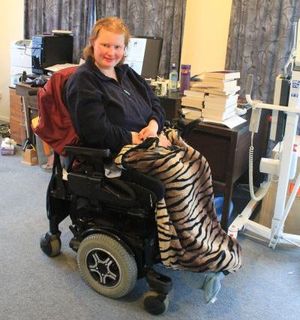 Jan Butterworth in the lounge of her former home in Papakura. Note the large stack of books she has on her computer desk awaiting review! Photo: RNZ

When visitors came to Jan Butterworth’s former home in the Auckland suburb of Papakura, she would ask them to come in through the ranch-sliders at the side of the house, rather than her front door. This was because when the 36-year-old University student and book reviewer needed to leave the lounge, it was an arduous process. Especially if the door was closed.

Jan uses a power chair because she has limited mobility due to a degenerative impairment. But the doorways in her former house were so narrow, it would take her minutes to negotiate them rather than seconds. “A physiotherapist measured the doorways and said if they were a centimetre narrower, she would not have let me move in,” Jan says. But despite its unsuitability, Jan says it was a huge improvement on previous rental accommodation in Red Hill.

The street entrance to that house was so steep, Jan says it was such a hassle she barely ever went out. But now thanks to the help of a Northland housing trust, Jan is welcoming friends and family at the front door of her new home with little trouble. Jan is amongst the first tenants who have moved into eight new accessible properties built by the Whangarei Accessible Housing Trust in the Auckland suburb of Takanini.

The houses, made possible by a $2 million Government Social Housing Unit grant and additional funding from charitable trusts, have been designed to accommodate all members of a family. The properties are scattered through a new subdivision that’s close to amenities, as well as public transport. Features include level access, wide open-plan living areas, kitchens with split level bench heights, kick plates on doors, and a bathroom Jan can get into on her own.

Auriole Ruka, Regional Manager at CCS Disability Action and Whangarei Accessible Housing Trustee, says the trust has come to Auckland because there is an obvious undersupply of accessible rental properties in the region. While Auriole says she knows some would view a mere eight homes as insignificant, she believes it’s an important beginning. “It’s the start of a challenge for others… we’ve got the providers with all the goodwill and intent… the challenge is for our Government to keep the momentum of those providers.”

Vanassa McGoldrick, chairperson of the Whangarei Accessible Housing Trust, agrees. “For too long accessible housing has been dumped in the ‘too hard’ basket….but we’ve delivered these houses on time and under budget… it’s do-able!”

And with Statistics New Zealand release of the latest Disability Survey showing that one in four New Zealanders now identify as having a disability, Vanassa says the completion of the homes is timely.

“What are we doing in terms of creating this housing?  We are a drop in the ocean in doing eight houses in Auckland, we recognise that but you have to start somewhere… get it right and get the word out.”

The Trust is already scouting for further potential sections in the area. In the meantime, Jan is busy settling into her new surrounds. “It’s a house that lets me do my own thing, a lot more freedom now,” she says with a grin as she waves goodbye to me from her front door. “It should meet my needs perfectly… right down to the cat door that’s been installed for me!”

Jan was born in the Auckland suburb of Mangere. She was diagnosed with a degenerative impairment at the age of 14 and slowly lost her ability to walk. She now uses a power chair to get around. “You don’t worry too much on what you can’t do, you focus on what you can do,” she says with a shrug of the shoulders. And her philosophical outlook on life has meant she is busy from the time she gets up till the time she goes to bed.

Catching the reading bug from her mum, Jan reviews books for various publishers on her blog.  At any one time she has at least a dozen books waiting for review by her computer. “I read anything! I’m the type of kid who used to read the back of the Cornflake packet,” Jan says laughing. Although she reviews a wide range of publications from cookbooks to children’s books, her real love is for fantasy, mystery and paranormal.

She is the current secretary of the Science Fiction and Fantasy Association of New Zealand and has a Diploma in Information and Library Studies. She is also working towards a Communications Degree and would also like to study for a Diploma in Public Relations. And if she wasn’t busy enough, Jan is heading a committee that is trying to bring the 78th World Science Fiction Convention to New Zealand in 2020.