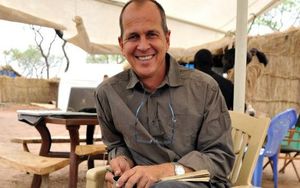 The freed al-Jazeera journalist Peter Greste says media freedoms are under threat and governments are using the war on terror as an excuse to limit press freedom. Mr Greste, a former Radio New Zealand correspondent, was jailed for 400 days in an Egyptian prison along with Al Jazeera colleagues Mohammed Fahmy and Baher Mohammed. They were convicted of supporting the banned Muslim Brotherhood group and sentenced to seven years in prison. Peter Greste was released in February and deported to Australia. His friends and colleagues, Baher Mohammed who is an Egyptian national, and Mohammed Fahmy a dual Egyptian-Canadian national, are on bail in Cairo, awaiting retrial.

Mr Greste says the past three years have been the most dangerous for journalists since the Committee to Protect Journalists began keeping records in 1991. He says the so-called war on terror has left journalists open to attack from governments of all kinds, and he’s advocating for a universal charter of media freedoms, which would define the relationship between governments and the media. Mr Greste says 400 days in prison tested his limits but did not damage him.

09:30 Review of teaching of digital tech in schools

A major review is underway into how digital and computer technology is taught in schools amid concerns that the education system has failed to recognise its importance and value to the economy.

The government has asked the ministry of Education to undertake a review. The Ministry has commissioned a group of educators, students, academics and key members of the tech industry to assess how it is taught now, and what more needs to be done.

Dame Ann Leslie reports on the election campaign (just three weeks to go until the general election) and the aftermath of the diamond heist.

What happens to a body when it starts to decompose is not a subject many people want to think about, but for forensic scientists like Shari Forbes, who is setting up Australia's first body farm, a body's breakdown gives vital evidence of the timing and way in which a person has died. There are currently five body farms in the United States where dead bodies are deposited in secure outdoor facilities so that their decomposition can be closely monitored and now Sydney's University of Technology is preparing to take donated bodies at a body farm on a 48 hectare bush site in the lower Blue Mountains, next year.

Correspondence between Major General Godley and Lady Louisa Godley May to August 1915. Edited and arranged by Jane Tolerton. Read by Ginette McDonald and Sam Neill (4 of 10, RNZ).

Continence nurse advisor Mary-Anne Caulfield discusses toilet training and dry nights for children – what is normal and when should parents worry?