09:05 What should the Government be doing to better regulate low-quality boarding houses - the lodges of last resort?

Those at the frontline of dealing with substandard boarding houses are still waiting for action on better regulation of "lodges of last resort". What needs to be improved, what has a Parliamentary committee recommended and how is the Government going to respond?

Monte Cecilia Housing Trust provides emergency housing in Auckland and advocacy and support for the homeless.  David Zussman is the Trust’s executive; and Minister of Building and Housing, Nick Smith discuss.

Investigative journalist Hajo Seppelt has made a  documentary for German television, which alleges systematic doping among Russian athletes, and accuses Russian and international sports officials of a massive cover-up.

Jamie Dettmer looks at the changing face of global jihad. The threat of foreign jihadist fighters and what the West is trying to do about it, Where does Obama's policy go now in Syria and Iraq.

New Zealand actor Chelsie Preston Crayford has had a big year on the screen in Australia. She’s been nominated for an Australian Academy of Cinema and Television arts award for her part in the hit ABC political thriller The Code. Two years ago, she won a Logie award for outstanding new talent for her role in Underbelly Razor. The daughter of film maker Gaylene Preston and musician Jonathan Crayford, she’s acted in film, television and theatre in this country also.

Chelsie Preston Crayford talks to Kathryn Ryan about achieving success in Australia and her debut last year as a director.

The local hood comes unstuck in the Christmas rush. 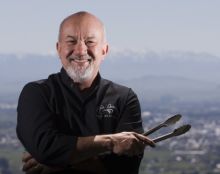 Gourmet barbecuing ideas with Raymond van Rijk. Raymond's BBQ Gourmet based in Havelock North offers a catering service and runs cooking courses. He has more than 30 years experience in food, hospitality and barbecuing. Raymond van Rijk is a graduate of The Maastricht, School of Hotel Management, in The Netherlands.

The sniper of Assumption Island in the Seychelles.