09:35 Ocean acidification in Antarctic "canary in the coalmine" for New Zealand

Dr Mary Sewell is presenting information at a major international conference on Antarctica about how climate change is affecting the Antarctic ocean ecosystem. She says the results there are a "canary in the coalmine" for what will happen in New Zealand's waters. One third of the planet's emissions of carbon dioxide are absorbed by the world's oceans, and ocean acidification is considered by scientists to be one of the most important stressors facing marine ecosystems of the future. Mary Sewell is an Associate Professor of Biological Sciences at the University of Auckland. Her latest research has some surprising results, including that the effects of ocean acidification will be seen in Antarctic waters earlier than previously thought. 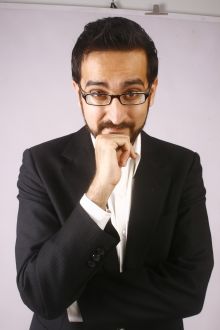 Sami Shah is a Pakistani Western Australian based comedian, improv actor and writer.comedian, improv actor and writer. He was a member of Pakistan's first improvisational comedy troupe and also had his own satirical television show in Karachi, and a newspaper column. A little dicey against Pakistan's political backdrop, and after witnessing bomb attacks at close range and being the target of death threats, Sami decided on a new life, across a couple of continents, to settle in Western Australia. He has spent time working as a news producer which he says helped to sharpen some of his comedy skills and black humour, but his comedic routines also contain deeper more serious messages.

Sami Shah won Best Local Act at the Perth International Comedy Festival in Perth last year. Local – because he and his family migrated to Australia two years ago. Under the terms of their Australian migration visa, Sami and his wife and daughter had to settle in rural Western Australia, so they moved to the country town of Northam, north east of Perth. With the move downunder he has gained an addiction to meat pies and a fear of hitting a kangaroo when driving home on rural roads following late night comedy gigs.

Sami Shah has a book out, I Migrant, tells his story about what it's like to start a new life in a new country with the hope your family can be safe and have no limits on their future.

Is the man who gives up his horse and does the work of two a greater patriot than the youngster who signs up for war? A WWI short story (RNZ)

Mike Williams and Matthew Hooton discuss the National Party's campaign launch and housing policy, the Internet Mana launch, and is John Key managing to rise above the ongoing fallout from Dirty Politics?

Auckland chef Jeremy Schmid says many foods lend themselves to smoking. He'll run through recipes for Smoked Pork Ribs with Barbecue Sauce, Smoked Tomato and Basil Bruschetta and for dessert, Smoked Pear with Cinnamon Cream. The recipes are from Jeremy's latest book, Smoked, which contains many recipes for meat, seafood, vegetable and fruit. The focus is very much on how to add flavour, cure and prepare dishes. Jeremy Schmid has worked as a chef here and in Europe and he's also done some post graduate study at the prestigious Culinary Institute of America in the Napa Valley, California. He is currently a chef at the Officers Mess in Takapuna.

11:45 Urbanist Tommy Honey - Transportation Projects Don't Need to Take as Long as They Do