David Still's daughter Alexis was one of 10 passengers who died in a hot air balloon crash in Carterton in 2012, along with pilot Lance Hopping. He says the Civil Aviation Authority failed to act despite repeated complaints about Hopping prior to the accident, and he's calling for the government to force change upon the aviation safety regulator.

The Wellington based company Aurecon is working on several big renewable projects, including the Cookhouse windfarm in South Africa which will be able to supply electricity to around 100,000 homes.

10:05 The survivor's guide to the immune system with microbiologist Idan Ben-Barak 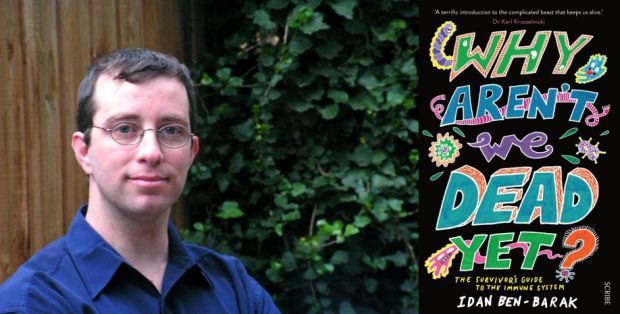 Idan Ben-Barak and the cover of his book Why Aren't We Dead Yet?

Idan Ben-Barak is the author of 'Why Aren't We Dead Yet? (published by Scribe). He explores the immune system and what keeps it running, how germs are destroyed and why we develop immunities to certain disease-causing agents, He also examines the role of antibiotics and vaccines. Idan has a Masters of Science degree in microbiology and is completing a PhD in the history and philosophy of Science.

A  fiction which tells the story of four convicts who stowaway and then get dumped on an uninhabited Pacific Island. (Part 7 of 12)

Nicole Atkins is from New Jersey and released her first album, Neptune City, in 2007. She has a big, full voice, similar to Mama Cass Elliott and the production and songs on her first album are reminiscent of Roy Orbison. Nicole split with her record company after a covers EP and went the independent route heading in a more contemporary, rock-oriented style along the way. Her latest album Slow Phaser was released early 2014. She has been on tour opening for Nick Cave and the Bad Seeds, and Marty saw the show in New Orleans recently.

Ursula looks back on the implications of the decision of the court to terminate the right of TV3 to film the John Banks trial.

A poem for Jeff Koons, a new way of auctioning off art, and a problem with huge ships in Venice

An Auction Based On Emotion - Kosta Boda
http://auctionbasedonemotions.com/en/