09:05 Congestion charge suggested for Auckland - how has it worked in London?

Stephen Glaister, Emeritus Professor of Transport at Imperial College in London, former Transport for London board member and the director of the transport research charity, the RAC Foundation, a research think tank associated with Royal Auto Club; and Paul Callow, Delotties partner who lead a 2007 study for the Ministry of Transport on whether congestion charges would work for Auckland.

Dr Joe Dunn is a Sydney psychiatrist who founded "Psychs on Bikes" – a group of  mental health professionals who undertake huge motorcyle trips around regional Australia to raise awareness of the serious mental health issues that impact rural communities.

Jeff Kennedy founded Caffe L'affare more than 20 years ago and with his partner Bridget Dunn has now opened Prefab cafe in central Wellington.

Off the beaten track in South Westland and Fiordland. 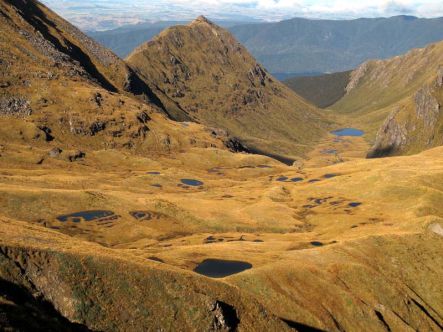 View of tussocklands and tarns from the summit of Mt Burns, near the Borland Road, Fiordland. Photograph by Kennedy Warne.