Please note that this morning's broadcast was interupted by a fire evacuation at Radio New Zealand House in Wellington.

The controversial 'pokies for convention centre' deal being negotiated by SkyCity Casino and the government.

The latest on the US Republican race to the White House.

Professor in the School of Architecture, University of Waterloo and principal of the Toronto design collective Philip Beesley Architecture Inc, Philp Beesley is in Wellington to give the keynote speech at the seventh annual Design Semantics Form and Movement (DeSForM) conference April 18 - 20 2012. 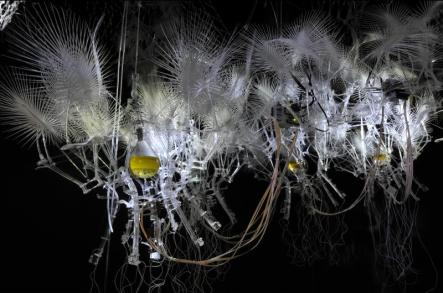 Hylozoic Ground from the Canada Pavilion for the 12th International Architecture Exhibition of the Venice Biennale.

Helena Rubinstein: The Woman who Invented Beauty by Michele Fitoussi
Published by HarperCollins

A whimsical travelogue in which the narrator and her companion Burton enjoy a ‘tootling’ tour through the back roads of England, Spain and India. Along the way they encounter a colourful cast of characters, visit the ‘Alhambra’ and buy bespoke boots in India.

Sam Scott (pictured right), founder and artistic director of Massive Company, which is 21 years old this year. Sam has a particular commitment to working with and developing emerging artists, alongside professional practitioners. She's taken shows to the UK and Europe, where they've been critically acclaimed.

Tonight (Tuesday) Massive's latest show, The Brave, opens: it's created from true confessions – baby teeth to mortgages – where eight men front up on a bare stage.