Treasury says another 2400 jobs could go from the public service in the Government's drive to reform the state sector. However a report released yesterday showed just $20 million of new savings was achieved last year, on top of $87 million the year before. Prime Minister John Key plans to deliver a speech as early as next week outlining the Government's thinking on further public sector reform.

Feral cats are wreaking havoc across the country, posing a grave threat to native birds, lizards and frogs. The SPCA says it has been inundated with them, but it has a policy to trap, neuter and then release the cats, rather than cull them.

David Trubridge is best known for his iconic bamboo plywood lights. Based in the Hawkes Bay, the UK-born former forester sells his work all over the world and has exhibited at the prestigious 100% Design in London, the Salone del Mobile in Milan and the International Contemporary Furniture Fair in New York. 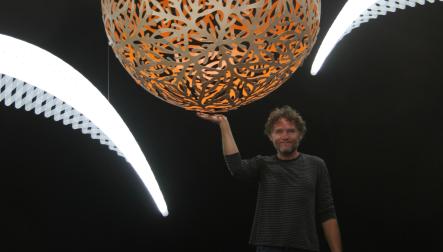 Zen Under Fire by Marianne Elliott
Published by Penguin Group

Telecom's move to shut down its CDMA network in July; the Bill of Rights for mobile users; why we should celebrate infratructure; and Apple's latest iPad.

Fossickers, fieldwork, and why it's important to advocate for heritage.

Fair Go and advertising; Tamihere versus Bain; and the return of Q&A on TV One.