An Australian scientist is studying whether parasitic worms, in small numbers, can help coeliacs tolerate gluten.

Coeliac disease is an auto-immune disease triggered by eating foods containing gluten. Gluten is a mix of two proteins found in wheat and associated grains. 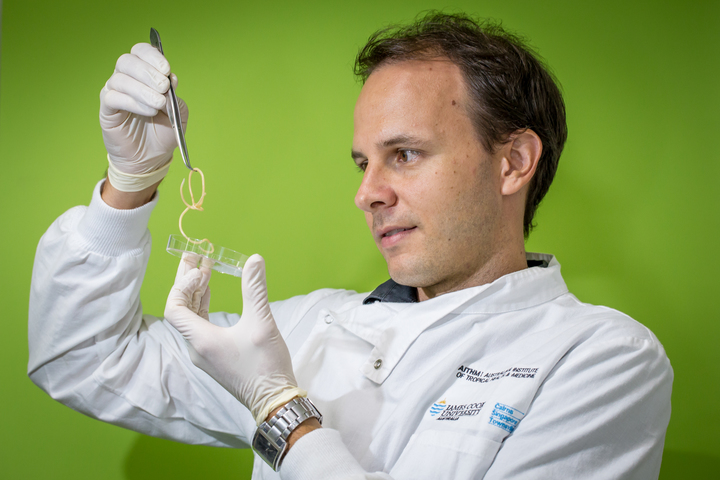 Dr Paul Giacomin's research is focused on whether hookworms reactivate the immune system to tolerate gluten.

The human hookworm is still a serious health problem in developing countries, a person infested with large numbers can became seriously ill. The worms suck blood and can cause anaemia.

"People can be infected with hundreds of these little worms, and these blood feeding parasites attach to your intestinal wall and suck your blood."

But in small numbers, he says, they may have a therapeutic effect and have quite a profound effect on the immune system.

"We have found if you give very few numbers of these worms, 10 to 20, they are relatively safe and with an adequate diet these worms are safe and well tolerated."

He says the prevalence of auto-immune diseases such as coeliac disease, multiple sclerosis and inflammatory bowel disease coincides with modern hygiene and medicine.

Some of these auto-immune diseases have arisen more in developed countries where worms and other infectious agents have been eradicated.

“The hypothesis is a long time ago, when we grew up, we were always infected with these worms, we were infected with a range of bacteria, viruses and parasites etc and and they shaped your immune system in early life.”

He said such parasites gave stimulus to the immune system they allowed it to develop properly.

“And the hypothesis now is that maybe we're too clean.”

“We think of these worms as kind of big probiotics.”

In trials he says researchers have noticed the immune system changes if the parasitic worm is reintroduced and the inflammatory response coeliacs would normally get with gluten is absent.

“In the lab we've noticed the worms may do this by secreting and producing specific molecules or enzymes and these proteins interact with our immune system and change their function to make them less inflammatory.”

The next step is demonstrate that the worm does have a therapeutic effect and if it does isolate the molecules it excretes and develop a conventional therapy.

Dr Paul Giacomin is a research fellow at the Australian Institute of Tropical Health and Medicine and has been awarded a Queensland Young Tall Poppy Award.