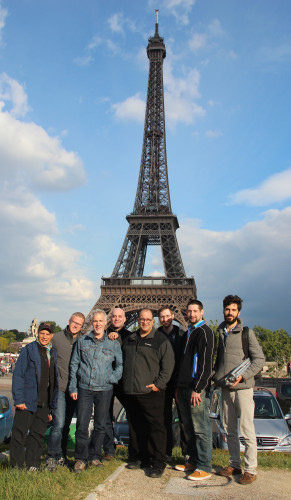 Joseph Bertolozzi with musicians in front of the Eiffel Tower Photo: Supplied

For over 100 years the Eiffel Tower has been hailed as an architectural landmark, an engineering feat, a monument, a destination …. now Joseph Bertolozzi reveals its music.  Bertolozzi harvested the Eiffel Tower’s sounds using microphones placed on its surfaces and composed a work entitled Tower Music / Musique de la Tour, using only the natural sounds of the Eiffel Tower Itself.

Auckland Botanical Gardens curator Bec Stanley on the chlorophyll-filled bio-mass that photosynthesises around us.

More than half the world speaks more than one language. New research is showing that being multilingual has some surprising advantages - it can help us keep healthier longer. Gaia Vince finds out how knowing many languages can protect our brains over our lifespan, and even stave off the appearance of some diseases, including dementia.

This week on Insight, Lois Williams examines 'road vs rail' in Northland, as increasing numbers of logging trucks hurtle through the region's rural pockets.

David Knowles with The Sounds of Memphis - Beale Street Caravan.