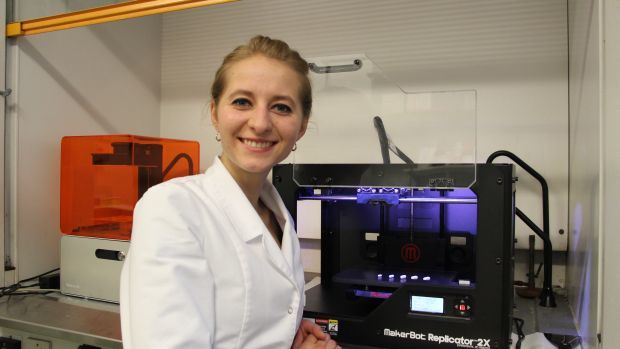 Katarzyna Pietrzak a student in Alhnan research group standing next to different strength theophylline tablets that she made with a 3D printer.

The role of pharmaceutics when engaging 3-D printing technology to produce what would be low-cost personalised medicines. With Dr Mohamed Albed Alhnan from University of Central Lancashire's School of Pharmacy and Biomedical Sciences.

9:52 A Slice of Banana Cake: In the great kitchen of life everyone makes their own banana cake. It's how we put it together that counts. Columnist Helen Brown rummages through her past to analyse the ingredients (1 of 2, RNZ)

Some of the long-lost jazz and blues traditions of the great jazz city of St Louis. Historian Kevin Belford talks about how St Louis' rich blues heritage got written out of the jazz history books. There's a look at how the turn-of-the-century Mississippi River riverboat economy shaped the early St Louis music scene. And a chat with jazz historian Ben Cawthra about St Louis favourite son Miles Davis' years growing up in the Gateway City, plus how Father of the Blues WC Handy's hard luck time in St Louis inspired one of the music's all time classics (6 of 9, PRX)