The Secret Life Of The Orchestra

The Orchestra is a mysterious beast. How does it work?  And where did it all come from? 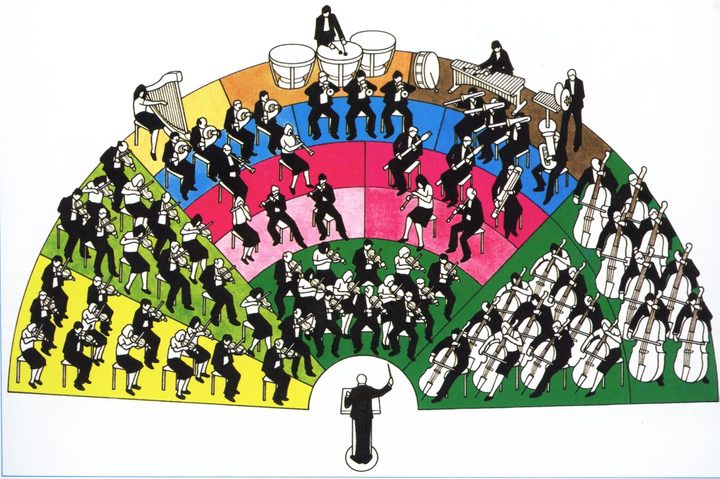 Layout of an orchestra Photo: Public Domain via Wikimedia Commons

Developed over hundreds of years from instruments with diverse origins; assembling massive numbers of musicians playing instruments that require many years of practice to master; capable of changes in sound and colour that range from a whisper to a jet engine... When it all comes together, the results can be startling.

In this four-part series Karl Steven explores the longitude and latitude of the four families of orchestral instruments: brass, percussion, woodwind, and strings. Along the way Karl finds out about how they work, their unusual past, and meets some of the players who devote their lives to them.

The Secret Life Of The Orchestra: Brass

Karl Steven explores the brass family and talks to some of New Zealand's shiniest brass players - Huw Dan, John Gluyas, and Emma Richards of ACE Brass and the Auckland Philharmonia Orchestra - about their instruments.

Delve into the history of trumpets, trombones, horns, and tubas and their kin, explore Tutankhamun's burial chamber, and learn about musical military signals, as well as listening to a truckload of brazen and beautiful brassy music.

The brass section of the orchestra is where you usually find the following suspects: trombones, trumpets, horns, aka French horns, and the tuba. Each of these instruments is pretty muscly in its own right, but taken together, they're a force to be reckoned with!

The instruments of the brass section aren't necessarily brass at all. They can be made of anything from metal to wood, to bone, shell, even plastic. The crucial thing for an instrument to be included in the brass section is that it's played by putting your lips together and blowing.

And you might be playing anything from an animal's horn, to a long wooden tube like the didgeridoo, a shell - as with our local putatara or, as is the case with the traditional orchestral brass instruments, a length of metal tube with a mouthpiece at one end, and a bit that flares out known as the bell at the other.

The technical name for this family is 'aerophones' but in the interest of keeping things "muscly", the preferred term is 'brass'. 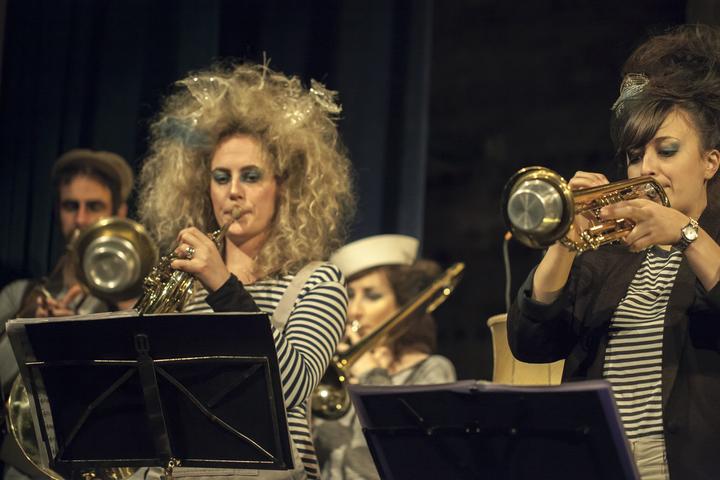 Meet the members of the brass family 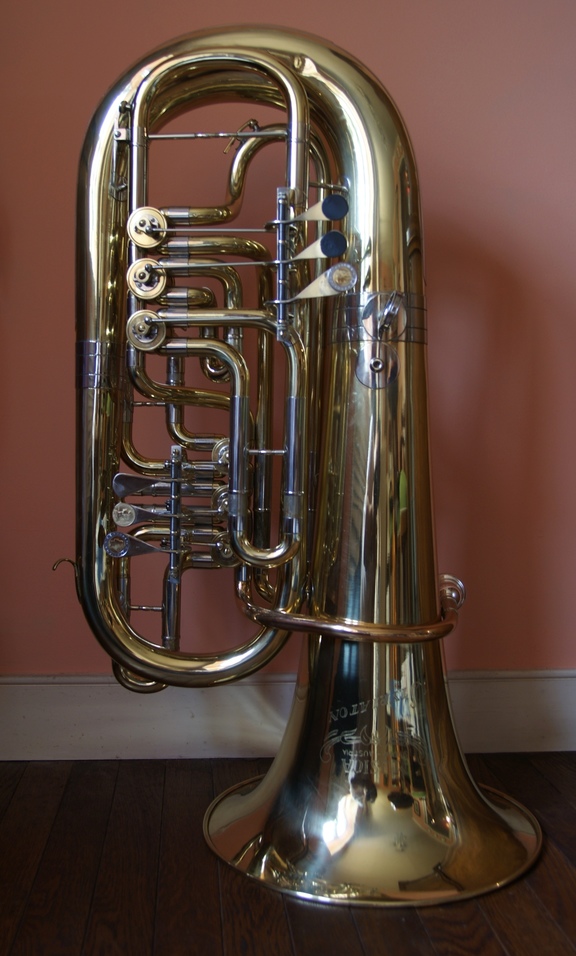 Starting at the bottom, the tuba is the low end of the brass section, taking care of the very lowest notes and the darkest, bassiest colours.

This can be something of a mixed blessing as the tuba often winds up stuck with little more than 'ompahs' to do. 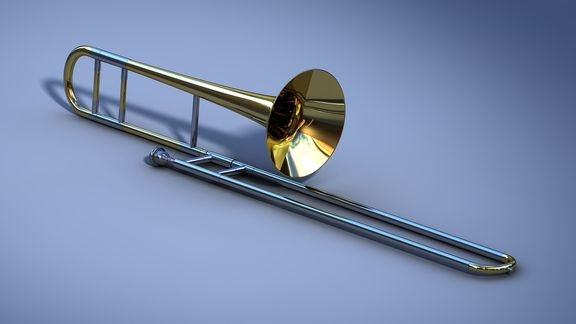 The trombone is an elegantly simple brass instrument that gains access to all the notes of the scale by means of a slider, that lengthens or shortens the tube as necessary.

John from Ace Brass remembers spying a trombone in the corner of the music room after a traumatic experience trying to get a good sound out of a trumpet. He never looked back: 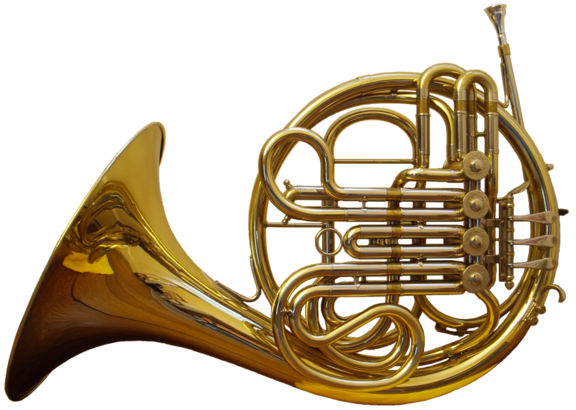 French horns are usually the largest numerically, and certainly the curliest physically of the orchestral brass. Horns have a wonderful distant sound that makes me think of horses and meadows and jodhpurs. Sometimes though, they conjure up other animals as in Prokofiev's 'Peter and the Wolf'.

The horn gets its distinct sound in part from the fact that the player plays with his or her hand inside the bell. And if that seems a bit like driving with one hand under the bonnet, it's justified by the horn's origins, and the need for players in the old days to move their hand inside the bell to correct tuning problems with early horns.

An advantage to come from this history is the discovery of the cool sounds that the horn can make by adjusting the position of one's hand inside the bell. When the hand is pretty much stopping the bell completely. This is called 'stopped horn'. 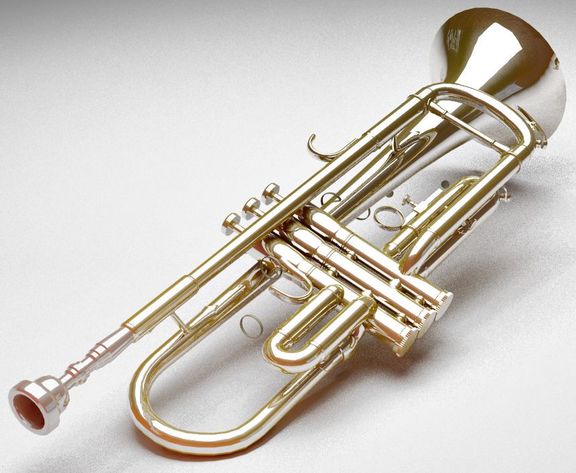 Our final member of the brass family is also the most well known. Originally, trumpets were basically the same as bugles, a length of tubing with a mouthpiece and bell, and no buttons or valves of any sort.

This simple arrangement limited the notes that could be played as the resourceful Hugh Dan of Ace Brass demonstrates below, with his primitive trumpet made from a length of garden hose and a kitchen funnel, with a trumpet mouthpiece stuck in the end - but you can just buzz on the end of a hose and use that as your mouthpiece.

Click on the audio player above to hear Hugh playing the garden hose trumpet. 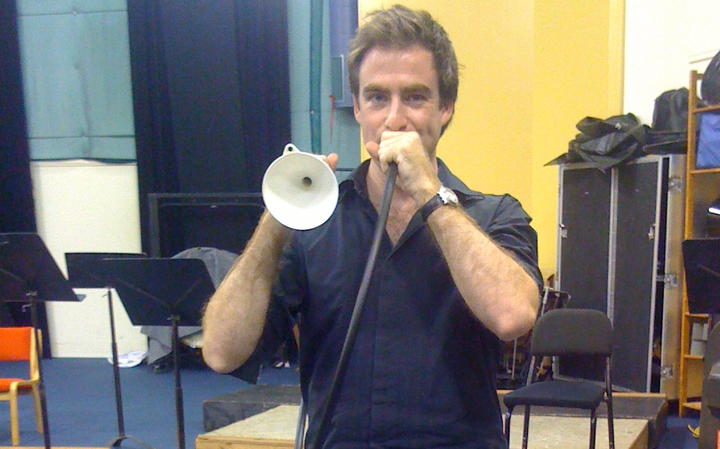 The origins of brass instruments

The oldest brass instruments we know about are actually still around to this day. As my grandfather used to say “no one ever regretted buying quality”. And the young pharaoh Tutankhamun was certainly no exception when he chose to be buried with a pair of trumpets that have lasted for over 3000 years.

When his tomb was opened in 1922 there was talk of a curse and a worldwide wave of Egypt-o-mania. These decorated straight trumpets, known as 'salpinx' were found, a bronze or copper one in the antechamber to the burial room, and a silver one in the burial chamber itself. 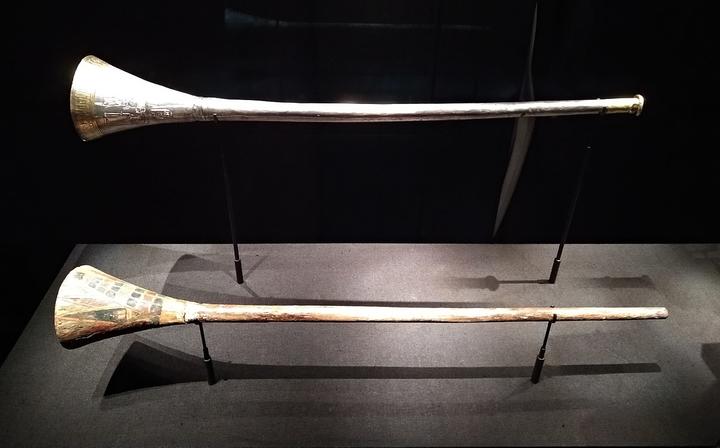 Silver and gold plated trumpet and its wooden mute from the tomb of Tutankhamun (1326-1336 BC) Photo: CC4.0 Suaudeau

In 1939, a few months before the outbreak of World War Two, the trumpets were played for the first time in millennia live for a BBC audience of over a million people. As the military trumpeter James Tappern prepared for the broadcast with a peremptory blast, the silver trumpet shattered in his hand. What a nightmare! But Tappern kept his head and they restored the trumpet in time to go to air.

By contrast, Alfred Lucas, one of the first archaeologists to enter the pharaoh's tomb, was so distressed by the trumpet shattering that he collapsed and had to be rushed to hospital, perhaps set on edge by talk of the curse on the robbers of the pharaoh's tomb.

As if that wasn't enough, just as they were about to kick off the electricity in the Cairo museum failed, so that the broadcast had to be done in the old-fashioned way by candlelight.

When these mysterious circumstances surrounding the playing of the trumpets are added to the outbreak of the Second World War few months later, it isn't entirely surprising to hear claims of the magical ability of Tutankhamun trumpets to summon war when blown.

In fact, this connection between the brass family and war is at the very heart of the instrument's history.

In the Bible we meet the shofar, a traditional Hebrew aerophone made from the horn of a goat, ram or kudu, as well as a special silver trumpet that God tells Moses to make.

All of these trumpets get used in ceremonial contexts, often to make announcements or call gatherings but also famously in military operations, as when Joshua and his army storm Jericho by circling the city for a week playing ram's horn trumpets until on the seventh day they sound a final blast, everyone shouts... and the walls came tumbling down. 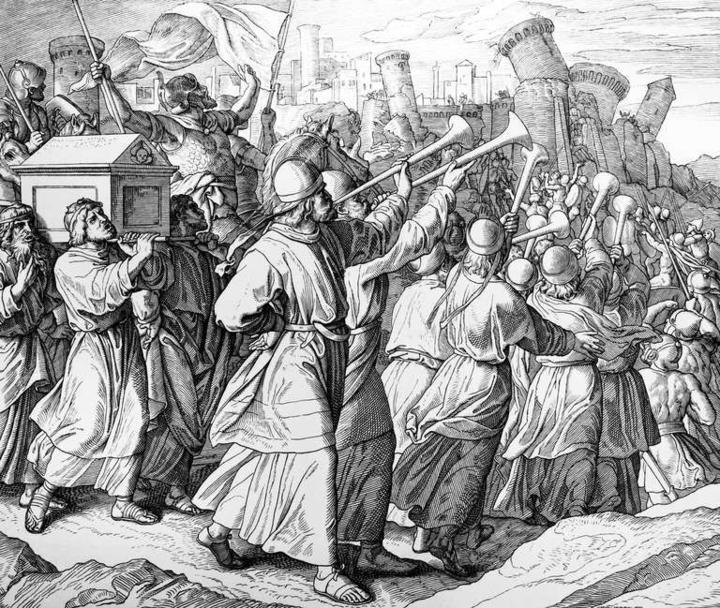 Greek vases show salpinx (trumpets) being carried by soldiers, and ancient authors describe how different melodic phrases from brass instruments could be used to inform soldiers of manoeuvres in a way that couldn't be understood by the enemy.

In an age before walkie-talkies, brass instruments could be used to synchronize troops, but they had the added bonus of sounding loud and scary, an enormous part of their ancient reputation.

Homer likens the terrifying battle cry of Achilles to a trumpet sounding the alarm of war, striking terror into the hearts of the enemy. Aeschylus writes of its stabbing voice. The ancient musicologist Aristides Quintilianus describes salpinxs as warlike and terrifying. And Julius Pollux, author of a hefty ancient dictionary, pulls out all the stops, calling it booming, roaring, loud, clear, stout, powerful, deep, solemn, violent, terrifying, warlike, hostile, forceful, stack weighty, rough and troubling. In line with this, Aristotle declared that the trumpet has its home on the battlefield and in sports competitions and isn't really for music at all. The brass family is starting to look so muscly that it's surprising that it gets to join in the orchestra at all!

However, it's the very features that make brass so well suited to the military: its volume, its power, its clarity, and its ability to arrest the attention of a large group of people, that also make it such a perfect addition to the orchestra, carrying all the clout that a composer might need up his or her sleeve.

It was in the lifetime of Austrian composer Franz Joseph Haydn (1732 - 1809) that an instrument maker, Anton Vidinger, invented the first keyed trumpet. Haydn wrote his Trumpet Concerto for the actual instrument maker. It was the first time that the trumpet was able to play chromatically, and Haydn uses that beautifully in the second movement of his Trumpet Concerto.

It wasn't until the 19th century that valves were invented. When a valve is pushed down on a trumpet, it opens up an extra length of pipe that the air then travels through, so it's actually lengthening the tube to make a lower note. And with those combinations and the harmonic series we can play one of every note on the piano.

And really the trumpet hasn't evolved a lot since then.

When combined with the rest of the brass section, the result is sort of like strapping a sword to the front of a tank: Extremely powerful and at times very difficult to park.

Thankfully, a brass section is highly skilled at making music on the move and has a long history of discarding pretty much all other musical accompaniment and striking out on its own in the form of brass bands of every description from the familiar Salvation Army brass band to Christchurch’s pioneering bicycling brass band of the late 1800s, which has recently been re-founded.

Discover the other parts of the orchestra: