Five top-notch Kiwi songs have made the top five for the 2019 APRA Silver Scroll Award, recognising excellence in songwriting. 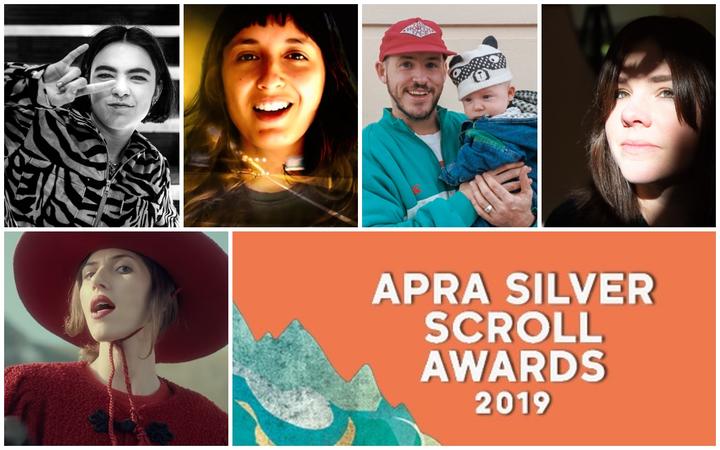 RNZ Music will have extensive live coverage of the Silver Scrolls at rnz.co.nz/music and on the RNZ Music Facebook page, from 7pm, Wednesday, October 2.

The APRA Silver Scroll Award is considered one of the most coveted awards in New Zealand music. Previous winners include Lorde, Dave Dobbyn, Bic Runga, Tami Neilson and Marlon Williams.

Four other songwriting awards will be presented at the Silver Scroll award ceremony:

Also on the night, the musicians behind the 1947 hit song ‘Blue Smoke’ will be inducted into the NZ Music Hall of Fame. Ruru Karaitiana, Pixie Williams, and Jim Carter will be honoured for their work as the creative forces behind Aotearoa’s first true pop hit 'Blue Smoke', but also their ongoing contributions to New Zealand’s cultural landscape.

All awards will be presented at Spark Arena in Auckland on Wednesday 2nd October.

More on this year’s top five:

Having been a finalist in 2018 for 'Future Me Hates Me', Elizabeth Stokes and The Beths return with their follow up hit 'Happy Unhappy', a pitch perfect, elegantly and eloquently mad-at-love song which swoops and soars and gets stuck in your head the same way a crush can.

Also a former finalist, Hollie Fullbrook aka Tiny Ruins is shortlisted this year for 'Olympic Girls' from her recently released third album of the same name. With a richly cinematic scope, it’s a beautiful, graceful alt-folk song full of wistful imagery, and determined questioning.

Having captured attention with her first ever release, 'Tough Guy' in late 2017, Stella Bennett (Benee) along with co-writers Djeisan Suskov and Josh Fountain have taken out a finalist spot with their irresistible funk pop hit 'Soaked'. The summery guitars, 80s swagger, and bold lyrics make for a bona fide earworm.

Aldous Harding (Hannah Topp) has also returned to be a finalist for the second time. Having spellbound everyone with her singular song Horizon in 2017, this time she’s a finalist for 'The Barrel' from her recent album Designer. It’s a fearless, delicate, grooving, multi-layered, adventurous pop tune that is bound by no boxes.