Taken from his family as a toddler, Lonnie Holley grew up with a burlesque dancer, then a liquor store owner who bought him for a bottle of whisky. As a seven-year-old, he was blamed for his foster mother’s death, then nearly died in a car crash.

He was put in a prison camp at 11, before living through Black Civil Rights riots and a horrific house fire.

The now 69-year-old African American has taken these traumatic experiences, as well as his love for the environment, and created music and artworks of beauty and hope. 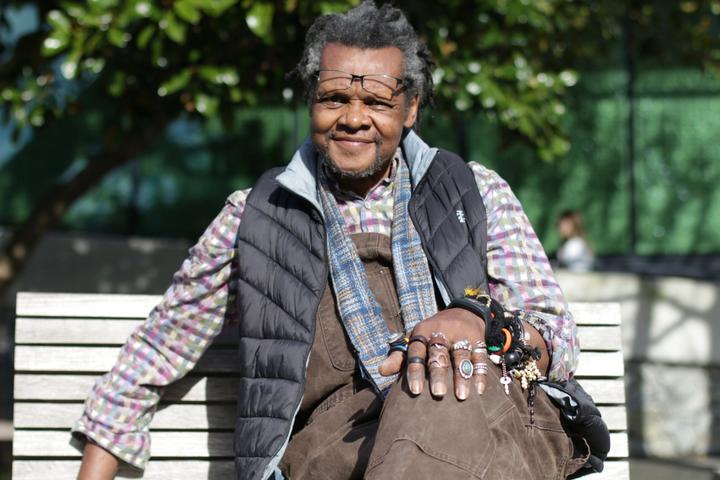 Lonnie's rambling improvised music is reminiscent of jazz legend Sun Ra, Nina Simone, and the jazz and blues he grew up with. He never sings the same song twice, but returns to subjects time and time again.

The Atlanta, Georgia resident is here in Aotearoa playing four shows. Lonnie, along with friend, manager and collaborator Matt Arnett spoke to RNZ Music's Kirsten Johnstone ahead of his Wellington gig.

Kirsten Johnstone: You were one of 27 children. Your Mum must have been just a child herself.

Lonnie Holley: Mama had her first child at 17. At one and a half I was taken away from my mother, and I started going from city to city with the fair and the carnival. So I really started learning human habits at a very early age.

I learnt what humans did to win their prizes.

You were born in 1950 in Birmingham, Alabama, which was an important focal point for the Civil Rights Movement. There was a bombing there in 1963 that, even here in New Zealand, we studied in school. What was that like for you as a child growing up?

Birmingham were a metal, an iron ore town. They was digging iron ore out of the ground for motors. We’re looking at mass labour. We’re looking at humans labouring for almost nothing to produce something that’s so important to the world's growth.

You get to the point where it has to be changed.

Now you’re becoming much more educated. You have to sharpen your education just to pass the test for the right to vote. The Negro was looked at as workers. Not so much, "I want to go to school now." 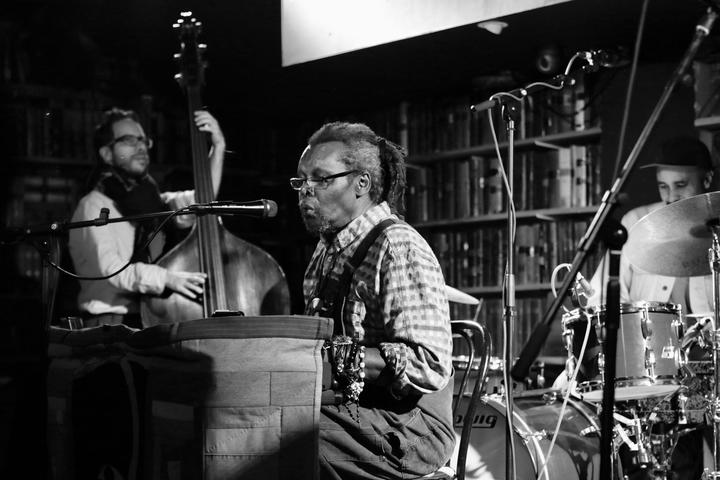 Did you go to school?

I did, but I didn't get no further than the seventh grade in school. My encounter with death kind of threw a big... Threw me out of the education arena.

You're talking about your car crash. What happened?

I had whips all over my face and so I was trying to get away from that and it was getting late in the evening. I took my wagon and I ran out into the street and I got hit by a car.

I got dragged up on the car for two and a half blocks. I stayed unconscious for three and a half months and I was pronounced brain dead. And the children from my class came and they was weeping.

I heard the noise and came conscious. So I kind of celebrate that now. My activities have not only been an offering to the right to use the brain, but the idea each person has a right to develop that brain. I try to do that, and as skillfully as I possibly can. 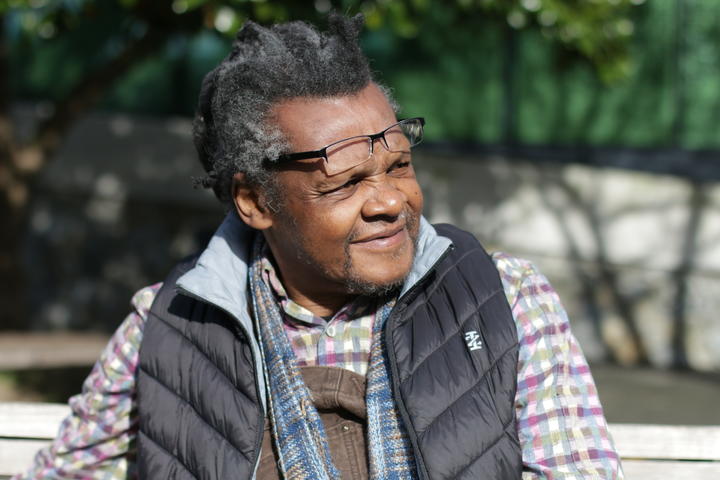 After the accident, I was put in this place called Alabama Industrial School for Negro Children [Mount Meigs]. I got a whipping there every day because I didn’t know how to pick cotton. I got a whipping there every day for all the other field habits that I didn’t learn. Picking green beans, and picking up watermelons, and picking up pecans, and all of these different things. Cleaning and shearing goats and working in the processing factory. All these things I had to try to learn.

It was slavery there. You were, what, 11 to 14 and it was the mid ‘60s and even though slavery had ended, it was slavery. Matt – Lonnie’s long time friend and collaborator, I’ll get you to jump in here. Do you want to introduce yourself?

Matt Arnett: My name is Matt Arnett, and Lonnie and I have been friends and conspirators for about 30 years. My Dad recognised Lonnie's art a long time ago and is a great patron of Lonnie's art.

At Mount Meigs Lonnie was at was the most... I mean, slavery in theory had ended a century before that. But as we now know, through lots of great people who have done a lot of research, where Lonnie was, was a slave camp. It'd be hard to call it anything but that.

Whistle blowers brought this place to wider attention, and in 1971 the Federal Government shut it down. But while Lonnie was there, it was a prison camp for black youth, boys and girls.

He was four years there before his grandmother found out that he was there and was able to get him out.

Your real grandmother. And you reconnected with your family then?

That's when all the youth came out, and the youth was so upset because they had killed these little girls.

They’d blown them to pieces. The news was trying to keep it on a down low, but people were being beaten with hosepipes, they had dogs set on them. The dogs would bite them, tear their skin to pieces,

Matt: But ultimately it was the media that shone a light on what was happening in Birmingham, and that's what kind of galvanized the Movement. 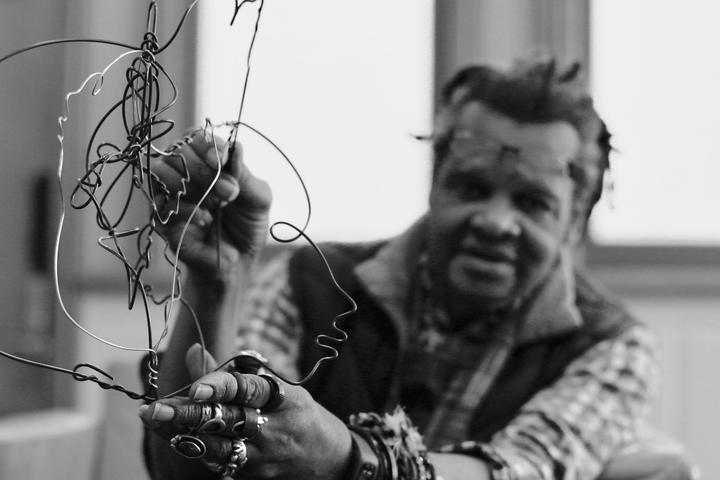 Lonnie Holley with a wire face sculpture he made while RNZ spoke to him Photo: RNZ/Kirsten Johnstone

Matt: It's a horrible childhood, no question about it, and nobody would wish that upon anybody. But Lonnie has said, without all of that, he wouldn't be who he is right now.

All of those experiences are what made him into the person he is now. And through art, and now music, that has saved his life. It's given him a purpose and a meaning, I guess.

Lonnie: It's given me a marker. It's like I don't see that my life was in vain. I could die today or tomorrow and I can be proud of William Arnett [Matt’s father] for moving my art to the level that it has been.

Performing at The United Nations, think about that. Exhibiting at the Smithsonian. I was the only self-taught artist in the White House Garden. Now I'm a front-running musician, ahead of so many other musicians that have been...

But again, it's an offering to the spirit that has gotten me here. Not so much of me trying to rock everybody. 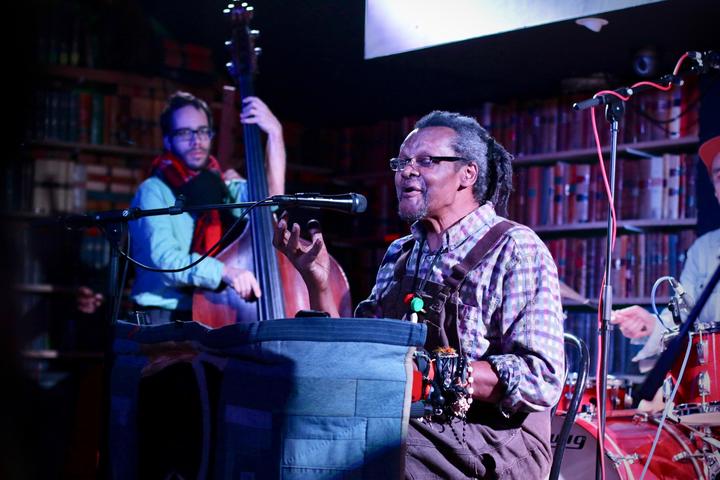 I think of the first few pieces that I did for my friend William Arnett, Matt's father. When he met me, I had a piece I had painted and it was about the mothership - Earth, and how when we abuse the earth, the earth will sit up. The volcanoes will erupt. Thunder and lightning, everything would be on fire.

We've got so many things on top of the earth now, that is containing gases and ores and all these other things, explosive devices. If the earth did start catching on a massive fire, then it's going to pollute our air. Our air is going to cause us not to be able to breathe, and that's the Biblical part.

Matt: The reviews of his work are always incredible, and talking about how timely his work is, about what's happening in the world. And it's like most of those pieces are from the '80s. Lonnie's message to us has been very consistent for years. And for much of that time he was making art warning us and trying to teach us about a better way. A lot of his art... He was sort of ignored. He was thought of as an ‘other’, and gets called an ‘outsider artist’ and ‘a visionary’. All these terms that I've heard Lonnie say cling to him like an ill-fitted suit.

When was the first time that you thought of yourself as an artist?

And  my sister was trying to get money to bury the children ... just to have markers for them. So I went over to another sister’s house and I found this stuff called a sand stone,  that we use in the foundry. And I made some baby tombstones for the two children.

So I start making baby tombstones out of this material. That went on for months and I couldn't really find a market for it. And I went on to start making... I didn't know nothing about art, I just was making, just to keep myself content and keep myself happy. I had a little over a hundred pieces in the backyard.

These are stone sculptures?

These was already finished pieces. Some had been dipped in paint and stuff like that. Then our house caught on fire.

And my mother called the fire wagon, and there was all these stones that I had created, all these things. I didn't know what they were. I just had made all these beautiful cuts and designs, and put phrases and things on them. Because by me looking at a magazine, I tried to do that onto a piece of sand. 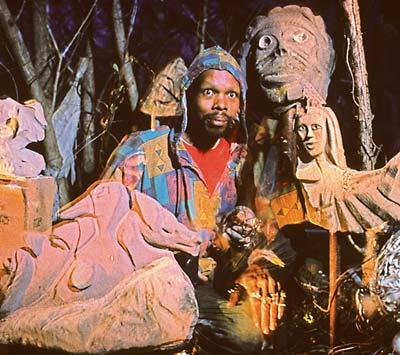 I had one piece that was really, really outstanding. It was big and huge, and it was the piece of President John Fitzgerald Kennedy. And the fire man asked, who was the artist?

And I didn't understand what he was saying. And he said, "Whoever did this is not an amateur." And I said, "I did that." He said, "You did these?" I said, "Yes sir." And he ran to the truck. This was the fire chief. And he got on the radio on a truck, on the walkie talkie, and he called Channel Six out.

And the TV station came out and they put the camera on all the pieces that I was doing. And he said, "There is the artist over there."

So that was the first time I heard anybody call me an artist. And then the next thing I know I took some of my pieces to the Birmingham Museum of Art, and two pieces was chosen to go to the Smithsonian.

And then I met William Arnett, Matt's father, and he'd really start looking at the found objects and the things that I was doing out of found material.

Matt: My Dad had travelled the world collecting art and studying art, and looking at art. And when he met Lonnie and went to Lonnie's environment in Alabama, he told Lonnie that, "I've travelled all over the world and I've been everywhere one is supposed to go to see the great art. And I've never been anywhere any more remarkable than this."

Lonnie: These things make me very, very proud of being, I call it, a self-taught artist. I'm still teaching myself and re-teaching myself every day to respect myself.

Watch short doco The Man is the Music | ​Lonnie Holley, from Nightshade Films.