CHAII came to New Zealand as an 8-year-old Iranian immigrant who learned to speak English by rapping to Eminem. Her debut single 'Digebasse (Enough)', with lyrics in both English and Farsi, has taken on a new meaning since the Christchurch terrorist attack.

As a young Muslim immigrant from Iran who grew up in New Zealand, rapper CHAII is struggling to make sense of the Christchurch terrorist attack.

She recites the lyrics of her song 'Digebasse (Enough)', which she performs in English and Farsi.

Your day has gone

"I was rapping ‘the days are over for any bullshit we come across. Those days for those kind of people are over’.”

She says solemnly, “That message stays the same only [it’s] quite a bit more relevant now.”

CHAII released 'Digebasse (Enough)', just a week before the Christchurch terrorist attack, on International Women’s Day. Within days the video had clocked 700,000 views ("It’s now hovering in the nine hundreds," she says) and had drawn a great deal of online attention.

When I spoke to the young Iranian New Zealander – before the Christchurch attack – our conversation focused on the release of 'Digebasse' and the response to its music video, which is set and filmed in Oman.

We've now reconvened in light of the tragic events in Christchurch.

“Before Friday, the song was originally about shining a positive light on the Middle East. I just wanted to show some scenery and some colour and people having a good time. Just people like everyone else.”

“Hatred comes from misinformation and that was what I was originally trying to stand up for [in the song].

“The only way you can beat that is through positivity, through showing and educating.” 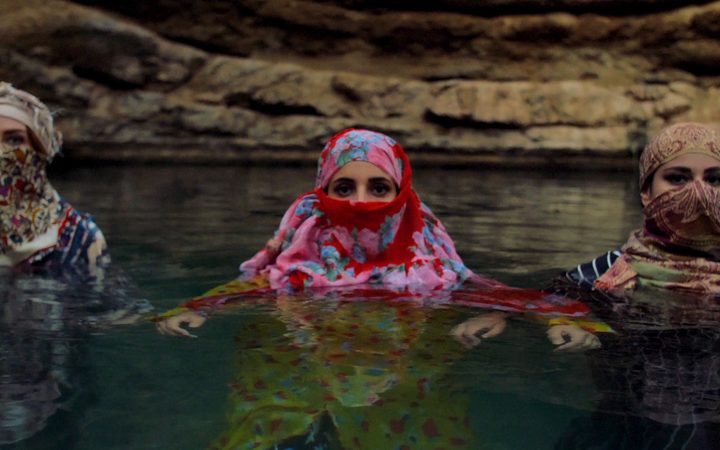 CHAII's original motivation for 'Digebasse' came from her desire to be a voice for Iran and women’s rights in Iran. It was also her own way of correcting “the misperception of Middle East in the media and Western news”.

Like many contemporary artists, CHAII seamlessly works across the visual and aural aspects of her creative project. And visuals were just as big a part of this release as the music itself.

The music video captures an energetic and visually rich journey across Oman where she and a group of friends drive across the countryside dropping in on locals and dancing with kids from villages in the desert. There are even camels running across the screen.

In every scene CHAII and her squad are dressed in brightly coloured tunics and veils typical of Middle Eastern dress. But their outfits are a deliberate twist on the traditional garb of that region.

“Covering up was a shout out to the underground hip hop scene in Iran that has to go hidden. I felt like I could be a voice for them,” explains CHAII.

“The global population of young Iranian women who rap is 0.0001%. There’s not many, hence why I know about them quite well. There are female Persian rappers in Iran but they’re obviously underground because rap, generally, is illegal."

CHAII’s whole creative project is a reflection of how she sees herself as a person of “multiple cultures”.

“I was brought up in New Zealand,” she says, while still being very connected to her Iranian roots, raised in a Farsi-speaking family.

“I’ve got that inspiring all my music so it’s not 100% the reflection of one thing. When I'm being true to myself, I don’t expect everyone to understand it or agree with it.

CHAII arrived in New Zealand as an eight-year-old and was drawn to music when she first heard ‘The Real Slim Shady’ by Eminem.

“I was kinda rapping before I could speak English.”

US comedian Hasan Minhaj recently spoke of the phenomenon of hip hop and rap being a source of cultural acceptance for “every immigrant kid ever”. CHAII agrees, explaining that the music helped her to fit into her new life.

“For a lot of people, it’s a therapeutic thing to do. You’ve just moved to a new country and you don’t know how you’re feeling and you need to express yourself.

"It kinda spooks me out, to a degree, that what I was trying to say has a reality to it now and it’s really scary that’s what it has come down to."