The finalists for this year's NZ Music Artisan Awards have been announced and include Estère, Marlon Williams, director Shae Sterling and the engineers and producers behind Alien Weaponry's Tū. 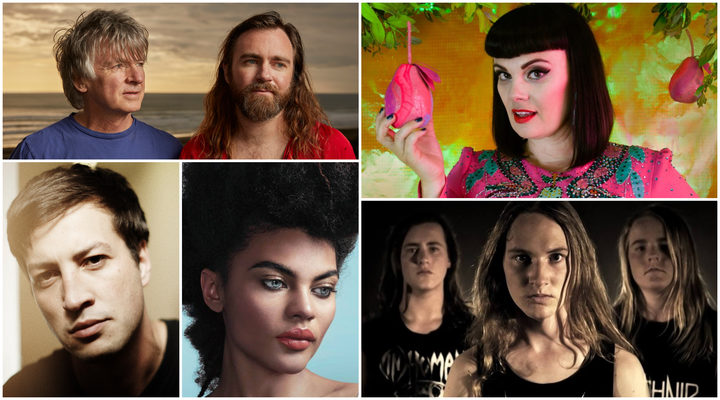 Five Artisan Awards will be presented at a special ceremony on Monday, November 5 at Massey University in Wellington:

The Best Producer finalists for 2018 are Simon Gooding, Tom Larkin and Hammerhead for their joint efforts on Alien Weaponry's debut Tū, Estère for her work on her own double album My Design, On Others Lives, and Neil and Liam Finn for their production on Neil's Out Of Silence.

READ: Neil Finn on the creation of Out of Silence

Impressively, Simon Gooding  (of Neil Finn's Roundhead Studios) has two nods for Best Engineer. He’s been recognised alongside Tom Larkin, Scott Seabright and Samuel Sproull for his work on Tū, as well as for his efforts alongside Jordan Stone on Out Of Silence. Chris Chetland is a finalist for Best Engineer for the second year in a row for his work on REI's Rangatira.

Also announced on the night will be the winner of the inaugural Music Teacher of the Year, and finalists (previously announced) are Elizabeth Sneyd, founder of Virtuoso Strings Charitable Trust in East Porirua, Jane Egan from Gisborne Girls High School, and Judith Bell who has led the development of the music program at Chisnallwood Intermediate School for the last 20 years.

The Artisan Awards specifically acknowledge those who capture, craft and enrich the artists’ musical works into final recordings, as well as the talented visual artists translating the musicians’ visions into album artworks and music videos.

Recorded Music New Zealand CEO Damian Vaughan says: “We are thrilled to bring the Artisan Awards to Wellington and shine a light on the incredibly talented people bringing world-class quality to Aotearoa’s music industry. This is the third iteration of the Artisan Awards, and every year the calibre of the finalists continues to impress!”

Music Teacher of the Year:

On the same day the awards are presented a number of seminars will be held at Massey University’s School of Music and Creative Media Production:

The VNZMA Artisan Awards will be presented at a ceremony at Massey University’s School of Music and Creative Media Production in Wellington on Monday, 5 November.

The Vodafone New Zealand Music Awards will be broadcast live on TV Three on 15 November from 8.30pm. Tickets are on sale now, $35 general admission + booking fee, available from Ticketmaster.