Singer Jenny Morris reminisces with Nick Bollinger about Frogs, Crocodiles, a Beatle's advice, and other highlights of a four-decade career, to mark her 2018 induction into the New Zealand Music Hall of Fame. 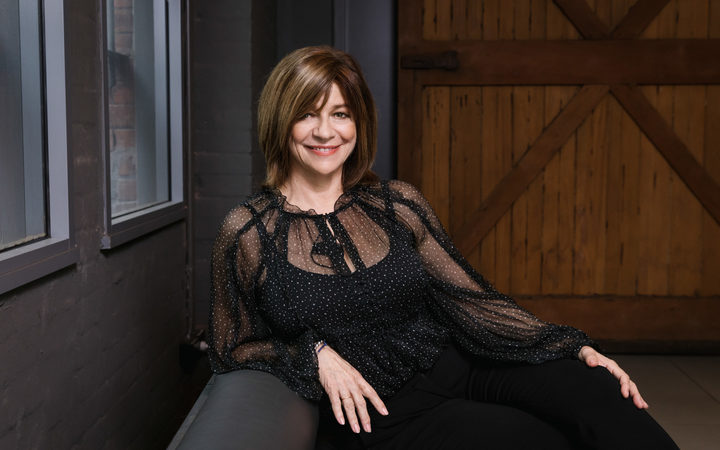 Jenny Morris is one of New Zealand’s most successful and enduring performers.

She first gained national recognition as singer for offbeat popsters The Crocodiles, with their signature hit ‘Tears’. She went on to multiply that success in Australia, touring with global hitmakers INXS, then as a solo star with hits like ‘You I Know’, ‘She’s Got To Be Loved’, ‘Saved Me’ and ‘Break In The Weather’. She has recorded with legends like Sly and Robbie and toured with the likes of Prince.

She has also been a longstanding advocate for songwriters, as a writer representative on the board of APRA (Australasian Performers Rights Association) and from 2013 as chair of the APRA board, a position she holds to this day.

In 2015 she retired from singing, suffering from spasmodic dysphonia, an incurable condition that severely affects the voice.

But I first met Jenny long before any of this. 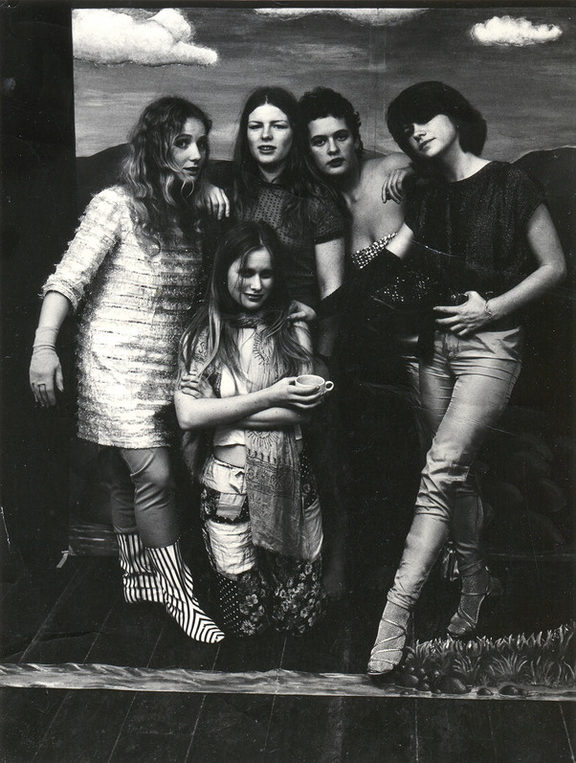 In 1978, a couple of my flatmates had decided to start an all-women band. As far as they knew, there had never been one in New Zealand before, in fact there were precious few anywhere in the world.

Though the Wide Mouthed Frogs, as they named themselves, had the drums, guitar, bass and keyboards covered, they were still looking for a lead singer. Someone suggested they try out a young home economics teacher who had recently moved to Wellington. That was Jenny Morris.

I caught up with Jenny by email recently and asked if she could remember how that initial meeting came about?

Jenny: When I first got to Wellington I was playing in a duo with a guy I’d met in Auckland. I can’t remember his name but he introduced me to Tina around the time the Frogs were still tadpoles, or eggs actually.

Did you come to Wellington looking to join a band? Had the idea of an all-women band ever occurred to you?

I came to Wellington to start my teaching career at Wainuiomata College. Playing music full time had never really occurred to me as I felt I should have a proper job for security. Also I wanted to save up to travel the world. I definitely hadn’t thought of starting an all girl band.

The various members of the Frogs had so many different kinds of talents and interests, it was apparent pretty early on that they wouldn’t be together forever. But at what point did you realise that, as far as you were concerned, an ongoing musical career was what you wanted?

I had been teaching for a while and simultaneously had started a music life too. At some point I found myself teaching, playing with the WMFs and also playing/recording with The Crocodiles. We had done a lunchtime Frogs gig at Wainuiomata College, wearing our normal Frog regalia which in my case was a leopard skin leotard, black tights and stiletto heels and after I saw the photos I thought, that’s not very appropriate attire for a teacher.

The thought hadn’t occurred to me prior for some reason, I guess I was in professional performance mode at that point. Also, I would often find myself knackered on school mornings after gig nights and it was unsustainable. Anyway, I thought one of these occupations has to go and so I gave teaching the flick.

How long did it take to realise that The Crocodiles success in NZ wouldn’t simply be repeated in Australia? And why do you think that was? Do Australians really have different tastes in music?

The Crocodiles success in Australia may very well have happened but we broke up quite soon after we got there. I think when Fane and Bruno were no longer there to drive it forward and add their particular essences, it was hard for the rest of us to find a definitive direction.

It was a very amicable split though. I don’t think Australians have totally different tastes. They’re as many and varied as they are in NZ. I think if the Crocs had really made a go of it though, we would have to have gone to Melbourne where music lovers were a bit more intrepid.

In the Crocodiles you were with people like Fane Flaws and Tony Backhouse who had written songs they wanted you to sing. How important was it to you to write your own songs and what motivated you in that direction?

I had been writing my own songs since the age of 12. It was something I started doing without even thinking about it. I got a guitar and when that happened I started putting all my poems to music with chords I’d learnt from the Tapestry songbook.

Fast forward to the Crocodiles era, all the songs for the first album had been written, they just wanted a singer so that was easy. With the second album I think I started to contribute but a watershed moment came to me at that time, courtesy of Tony Backhouse.

I guess I had it in the back of my mind that here were these highly capable, highly musically educated (especially Tony and Peter) writers who I was slightly intimidated by. But one day Tony and I were writing together and he said you know I would never have put those chords together because it’s not how I was trained but you did put them together because you didn’t think that’s not right and the outcome was that it actually worked! So Tony made us both realise there’s definitely a plus not to have too much structure, too many rules around songwriting.

It’s good to find a harmonious balance between the two. (That worked to a spectacular level with George Martin and the Beatles). That whole experience made me so much more confident with my writing and recording and I often accessed that conversation for many songwriting sessions. 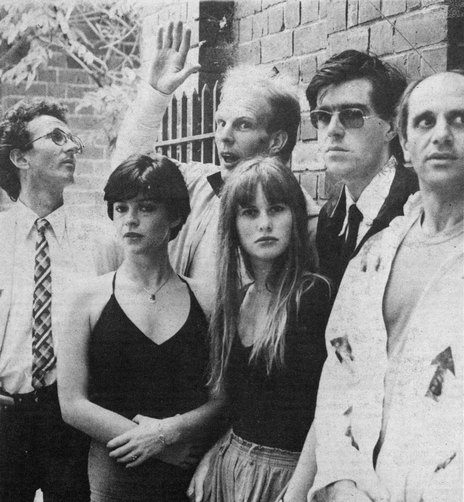 Some time in the mid-80s you were back here briefly for a tour with The Party Boys. You told Rip It Up at the time that it didn’t matter how big an act was in New Zealand, in Australia one has to start from scratch. What did starting from scratch involve?

For me it involved getting a manager. My first manager also managed Moving Pictures who the Crocodiles had supported. They were recording what would become a huge album with Charles Fisher producing. I recorded a song I’d written with Tony called Everywhere I Go which Charles produced, got asked to sign with EMI and had a top 20 hit with it, all in the space of less than a year. So it was all dumb luck that from scratch to hit was very quick.

You worked with quite a few bands before you established yourself as a solo artist. Was solo always the ultimate goal? When did you realise that was the direction you wanted to take?

Apart from the Crocodiles, every band I worked with was a means to an end, that of doing a solo album. I was writing songs throughout, some recorded with QED but the majority were written while I was touring with INXS. I always knew I’d be a solo performer eventually.

But the really important thing was that at any one time, whether with a band or solo, I was having fun. It was a great experience. There was no point making music if it wasn’t satisfying and stimulating and moving forward. Any time I felt that slipping, it was time for a change. 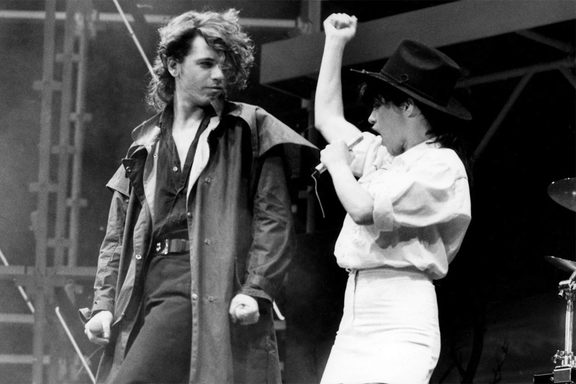 Thinking about the hits that really established you in Australia and here, there’s quite a range of styles. ‘Tears’ is very different from ‘You I Know’, which is again different from any of the songs you wrote: ‘Saved Me’ or‘She’s Got To Be Loved’ or ‘Break in the Weather’. Was there some particular quality or style you were looking for? How did you know when a song was right for you?

With the songs that were written for me - ‘Tears (Fane Flaws and Arthur Baysting), ‘You I Know’ (Neil Finn) and ‘Street Of Love’ (Paul Kelly), I could connect emotionally with them. I felt them. They were very good songs too. Writing my own songs felt like I was a conduit. Very often I’d have some sketchy lyrics and would open my mouth and strum and it’d all come together somehow. 'Little Little' is the best example. It poured out before I knew what had happened. It took 1/2 hour.

The only time I consciously tried for a vibe was working with Sly and Robbie. I’d assembled the songs and took them to NYC. I just sort of half hoped, half knew that those guys would do the right thing by them, and they did. Because I’m white I wanted an unselfconscious and comfortable groove that would fit me rather than me trying to fit it and they were so awesome in getting that. I’ve never really had a style. I just like music.

During and after that great run of hits in the 80s and into the 90s you were extremely well known, both here and in Australia. Did that bring about any particular changes in your life? Did it make things harder or easier in particular ways?

Australia and NZ are the best places to have a public profile. Any recognition you get is mostly respectful and so I didn’t really need to change my life apart from the obvious ways. Also if you enter yourself into the public arena, you have to accept certain consequences of that. I’m cool with it.

What skills from your life as a musician have been useful to you in your work with APRA - first as writer-director, then as chair – and what new skills have you had to develop?

Having firsthand experience with the issues that song writers and composers have to navigate is a definite plus when I’m explaining to politicians why copyright protection is so important or why it’s imperative for the music export trade to be subsidised or reminding our industry stakeholders that women are just as viable as men. I can speak from experience about our royalties being our only superannuation and that makes people listen. So basically it’s very helpful to have walked the walk.

Who knew running a board could be so complicated though? Everyone but me! And that’s true but I really love this work. I have had a baptism of fire with finding a new CEO, having my Chairmanship coincide with developing a new operating system and bringing our version of One Music alive. It is so great to be doing such important work. I love it.

I know you decided to stop performing due to your spasmodic dysphonia. What do you miss most about performing? What has filled the time that you used to spend rehearsing, recording etc.?

I miss that joy of opening your mouth and notes freely flowing out. I miss the emotional connection with band, audience, myself. I miss the cathartic aspect of performing. My days are filled to the brim with APRA business mostly but also charity stuff and travel and creative stuff and being with people. It’s FULL.

What are the best and worst pieces of advice you have had in all of your time in music?

I don’t know about best or worst but the funniest was from George Harrison who told me to put all my money in real estate. Great advice except I didn’t have any money.