During the song writing awards ceremony on Thursday night, the band's winning song was re-imagined in a more traditional Māori setting using taonga puoro. Watch that spine-tingling performance above.

The teenage band hail from the sleepy Tai Tokerau town of Waipu, just 40km south of Whangarei, which they call the “heavy metal centre of the universe”.

Te reo Maāori is seldom heard in the metal scene, and conversely metal is not well represented in the waiata Māori world. But for Henry, Lewis and bassist Ethan Trembath, kapa haka and heavy metal share a wairua.

“Kapa haka is very loud and aggressive and in your face so it kinda makes sense that it goes together,” says Alien Weaponry’s 15-year old guitarist Lewis de Jong. 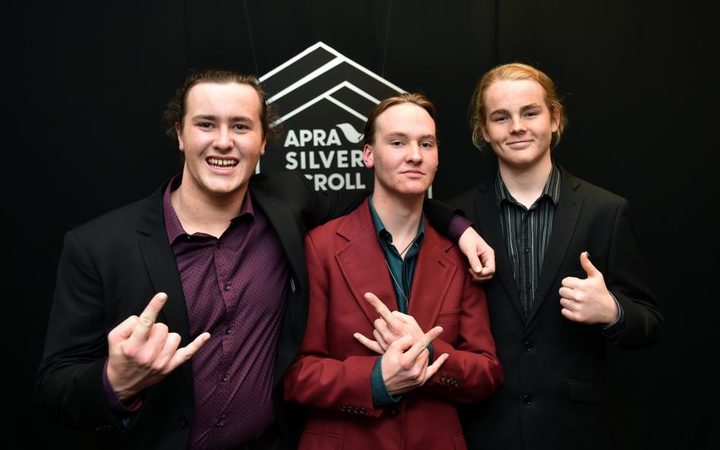 Drummer Henry de Jong, Lewis’s 17-year old sibling, explains. “There is definitely a very unspoken part of the music, it is feeling you get. It’s that same feeling you get when you hear an awesome haka. Pretty much if you can do that with your music and you’re playing metal, that is a really good thing.”

Although he recently told RNZ’s Mihingarangi Forbes,“it’s weird we were the first to do it.”

Alien Weaponry have been embraced by both the metal and waiata Māori communities. They’ve toured with local metal stalwarts Devilskin and supported Shihad. Earlier this month they impressed the manuhiri as the closing act at the Waiata Māori Music Awards. Soon they’ll be releasing their debut album, produced by Shihad drummer Tom Larkin, on the German label Das Maschine.

In their younger years,Henry and Lewis attended kura kaupapa Māori immersion education. For Lewis, te reo Māori was his first language, and music was not too far behind. He wrote his first song aged two. “I just kind of strummed the ukelele and it went ‘raiona, raiona, raiona’, which translates to lion in Māori”.

Henry adds, “We ended up having to move schools and we lost the reo and Lewis and I have been trying to pick it up… so really it’s been a huge help with the band to be writing in Māori to get that back.”

His sons share the universally familiar tale of childhood of playing the unwilling backseat audience to a parental monologue.

“Every time we’d drive past a location where a battle happened or something he’d say ‘Guess what happened here boys!?’ and then he’d tell us a whole story of how everything unfolded,” says Lewis.

Henry continues, “we used to think it was boring and stink. And then one day it was this particularly brutal incident when a missionary was stationed up somewhere and one of the old koroua was bought into his little house and they were being attacked by another iwi and the old koroua’s wife was like [to the missionary] ‘can you please hack my husband’s head off so the enemy don’t get it?’ “It’s pretty much this really brutal story and we were like ‘man that could be a really good song!’”

Within a decade the brothers have gone from singing about  lions to telling the stories of land confiscations and battles faced by their tupuna. The desire to write these songs is an “awesome way” of keeping their reo alive.

“I think there’s a lot of Māori in New Zealand that have at one point known the reo and then they’ve stopped speaking it and kinda forgotten it.”

Alien Weaponry are a three-piece heavy rock outfit hailing from rural Northland/ Te Tai Tokerau, and have been the opening act for the likes of Shihad and Devilskin. With an average age of 14, Craig… Audio 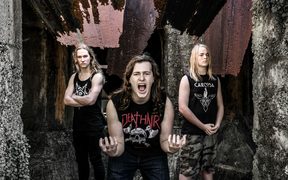